JAVIER SOLANA AND WESLEY CLARK: THEY KNEW, AND THEY CONDONED THE KLA ATROCITIES IN 1999 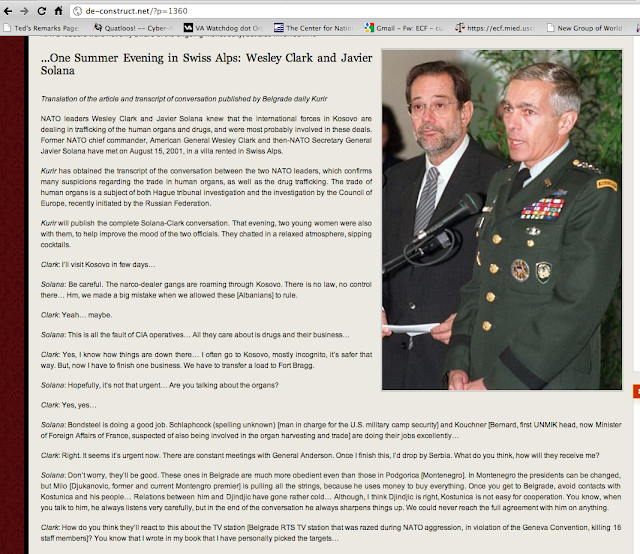 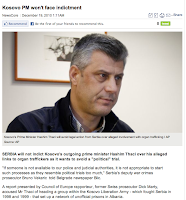 I heard the bells on Christmas day
Their old familiar carols play,
And wild and sweet the words repeat
Of peace on earth, good will to men.
And thought how, as the day had come,
The belfries of all Christendom
Had rolled along the unbroken song
Of peace on earth, good will to men.
Till ringing, singing on its way
The world revolved from night to day,
A voice, a chime, a chant sublime
Of peace on earth, good will to men.
And in despair I bowed my head
“There is no peace on earth,” I said,“For hate is strong and mocks the songOf peace on earth, good will to men.”
Then pealed the bells more loud and deep:
“God is not dead, nor doth He sleep;
The wrong shall fail, the right prevail
With peace on earth, good will to men.”
LINK TO I HEARD THE BELLS ON CHRISTMAS DAY MUSIC
As the Fifth Seal of Revelation, war on God's people is obviously widening, it is instructive to look at how we were propagandized to believe a one sided version of a story in 1999.  European leaders and American leaders conducting the extremely destructive bombing raids on the former Yugoslavia, in effect obviously "reducing the Balkans," knew that it was at least a two sided conflict.  They then took the religious capital of the Serbian Orthodox Church from it under the pretense of "independence" for those victimizing Christian Serbs.  Many Moslems did not buy the idea that it was for the purpose of protecting them either.   Yossef Bodansky's important book, BIN LADEN, THE MAN WHO DECLARED WAR ON AMERICA told us on page 394 that Islamist intellectuals said the real reason that the USA declared war on Milosevic was that "he would not surrender to the . . . New World Order."
It may well be that truer words were never spoken.  Truth is often the first casualty of war.  I remind all that this was plainly under Javier Solana's watch.  He had been given total authority to make the military decisions for any campaign against Yugoslavia.  General Wesley Clark took his orders from Javier Solana.  It was on January 30, 1999 that Javier Solana was given that authority.
According to an article appearing in THE AUSTRALIAN yesterday, THEY KNEW, THEY CONDONED, AND THEY IGNORED all obviously for the purpose of strengthening the New World Order in all its ugly future ramifications which included rights to take religious capitals.  Kosovo went first.  Jerusalem, Vatican City, Mecca, Salt Lake City, etc., etc., had better watch out:

"WESTERN leaders have been accused of turning a blind eye to murders, drug running and organ trafficking in Kosovo.

The West elevated a man it knew to be a criminal boss to the rank of European statesman.

Although Western intelligence agencies warned that Hashim Thaci ran an organised crime network in the late 1990s, Western political leaders backed his Kosovo Liberation Army, according to a report published by the Council of Europe.

The report, adopted unanimously by the council's 47 member states, will add to pressure for an independent criminal inquiry into Mr Thaci, now Kosovo's Prime Minister. It also places an embarrassing spotlight on the actions of the NATO members who intervened in Kosovo in 1999 as the country engaged in a war of independence with Slobodan Milosevic's Serbia. . . . Dick Marty, the Swiss senator who was the council's rapporteur for Kosovo, said the global community had shown a lack of determination to investigate the KLA. Without a witness protection scheme, the criminal rulers would never be brought to book, he said. . . ."

Read the whole story by clicking here.
Worse yet, it appears that Hashim Thaci will not face international justice as did President Milosevic.  A clear advantage of supporting the New World Order???  Serbia does not plan to seek the indictment.  Perhaps they fear that if they try, they might get bombed back to the Stone Age -- again?
"Who can make war with the Beast"?????   At least the NATO/NEW WORLD ORDER beast?
Stay tuned!
CONSTANCE
http://de-construct.net/?p=1360
Posted by Constance Cumbey at 12:13 AM

Immediately after watching this, I went to see what was happening on BORNTOWATCH.COM. The initial headline? "ARE YOU SITTING DOWN, ABBAS HAS CONSENTED TO A NATO PEACEKEEPING FORCE . . ."

UPDATE: JUST FOUND THIS ONLINE ON A 1998 RUSSIAN ARTICLE.


"In an article published yesterday, Belgrade daily offers transcript of the secretly taped conversation between Javier Solana and Wesley Clark, contents of which indicates that NATO leaders were not only aware of the ongoing monstrosity, but also involved in it.

...One Summer Evening in Swiss Alps: Wesley Clark and Javier Solana
Translation of the article and transcript of conversation published by Belgrade daily Kurir

NATO leaders Wesley Clark and Javier Solana knew that the international forces in Kosovo are dealing in trafficking of the human organs and drugs, and were most probably involved in these deals. Former NATO chief commander, American General Wesley Clark and then-NATO Secretary General Javier Solana have met on August 15, 2001, in a villa rented in Swiss Alps.

Kurir has obtained the transcript of the conversation between the two NATO leaders, which confirms many suspicions regarding the trade in human organs, as well as the drug trafficking. The trade of human organs is a subject of both Hague tribunal investigation and the investigation by the Council of Europe, recently initiated by the Russian Federation.

Kurir will publish the complete Solana-Clark conversation. That evening, two young women were also with them, to help improve the mood of the two officials. They chatted in a relaxed atmosphere, sipping cocktails.
Clark: I'll visit Kosovo in few days...

Solana: Be careful. The narco-dealer gangs are roaming through Kosovo. There is no law, no control there... Hm, we made a big mistake when we allowed these [Albanians] to rule.

Solana: This is all the fault of CIA operatives... All they care about is drugs and their business... "

SO, SOLANA WAS BLAMING ALL ON THE USA WHEN HE HAD THE DECISION MAKING AUTHORITY. HOW VERY CONVENIENT FOR HIM!

More from that transcript;

"
Solana: This is all the fault of CIA operatives... All they care about is drugs and their business...

Clark: Yes, I know how things are down there... I often go to Kosovo, mostly incognito, it's safer that way. But, now I have to finish one business. We have to transfer a load to Fort Bragg.

Solana: Hopefully, it's not that urgent... Are you talking about the organs?

Solana: Bondsteel is doing a good job. Schlaphcock (spelling unknown) [man in charge for the U.S. military camp security] and Kouchner [Bernard, first UNMIK head, now Minister of Foreign Affairs of France, suspected of also being involved in the organ harvesting and trade] are doing their jobs excellently...

Clark: Right. It seems it's urgent now. There are constant meetings with General Anderson. Once I finish this, I'd drop by Serbia. What do you think, how will they receive me?

Solana: Don't worry, they'll be good. These ones in Belgrade are much more obedient even than those in Podgorica [Montenegro]. In Montenegro the presidents can be changed, but Milo [Djukanovic, former and current Montengro premier] is pulling all the strings, because he uses money to buy everything. Once you get to Belgrade, avoid contacts with Kostunica and his people... Relations between him and Djindjic have gone rather cold... Although, I think Djindjic is right, Kostunica is not easy for cooperation. You know, when you talk to him, he always listens very carefully, but in the end of the conversation he always sharpens things up. We could never reach the full agreement with him on anything.

Clark: How do you think they'll react to this about the TV station [Belgrade RTS TV station that was razed during NATO aggression, in violation of the Geneva Convention, killing 16 staff members]? You know that I wrote in my book that I have personally picked the targets...

Clark: But you also know how much Clinton and his were pressing for bombardment of the Serbian television...

Solana: What we know stays between us! You mustn't talk about that with anyone!

"There is nothing hidden that shall not be revealed"!

Here's still more information on this:

Hope you won't get in trouble for 'spilling the beans' (LOL).

I found one interesting discrepancy in the story about Javier Solana and Wesley Clark. I repeat it here:

"
NATO leaders Wesley Clark and Javier Solana knew that the international forces in Kosovo are dealing in trafficking of the human organs and drugs, and were most probably involved in these deals. Former NATO chief commander, American General Wesley Clark and then-NATO Secretary General Javier Solana have met on August 15, 2001, in a villa rented in Swiss Alps."

From the Wikipedia article on Wesley Clark, we read:

"Clark set himself three initial goals in civilian life—to earn $40 million in the business world to let him practice philanthropy, to become an adjunct professor, and to become a professional golfer. Clark began a public speaking tour in the summer of 2000 and approached several former government officials for advice on work after life in government, including House Speaker Newt Gingrich, White House Chief of Staff Mack McLarty, and Richard Holbrooke. Clark took McLarty's advice to move back to Little Rock, Arkansas, and took a position with the Stephens Group, an investment firm headquartered there. He took several other board positions at defense-related firms, and in March 2003 he amicably left the Stephens Group to found Wesley K. Clark & Associates. Clark began writing, publishing two books—Waging Modern War and Winning Modern Wars—along with writing the forewords for a series of military biographies, as well as a series of editorials.[1] He had amassed only about $3.1 million towards his $40 million goal by 2003, but began considering running for public office instead of pursuing his business career.[94]"

He and Javier Solana are both Fulbright scholars and have much in common.

JAVIER SOLANA WAS NOT NATO SECRETARY GENERAL ON AUGUST 15, 2001. He was then "High Representative for the Common Foreign and Security Policy" of the European Union.

Interesting thing ~ I was at work, and overheard on a patient's t.v. a drama wherein a character was talking about how he was traumatized by the bombing of Serbia, with emphasis on how bad and crazy the Serbians were acting.The timing made me wonder...

Well I very much doubt Solana n' Co. are about to bomb Masonic Israel, don't you? Not least because, aside from the jokes at winks at international lodge conventions, Israel is reputed to have at least 80 nukes to play with, and to try and sabotage anything you'd have to get through Mossad, the IDF, and the Israeli Airforce first!

Nope, when the AC comes in he'll do it by flattery not by flattening!

If anybody is a master at flattery, it is clearly Solana. Don't know if he is the big cheese/AC at this time; however he both flatters and flattens!

Here is something I just found applauding what was done in Kosovo vis a vis Serbia. Kosovo was the religious capital of the Serbian Orthodox Church.

SUBSTITUTE "Jerusalem" for "Kosovo". Substitute "Israel" for "Serbia". Then you will have a clearer picture of where this is headed. You will also have a clear picture of the dangerous precedent that has been set: It is OK to take one's religious capital for political purposes!

the article is very petrifying, hopefully it can be useful and an important lesson

Thank you very helpful article. allow me to join to share health articles with your article hopefully useful.