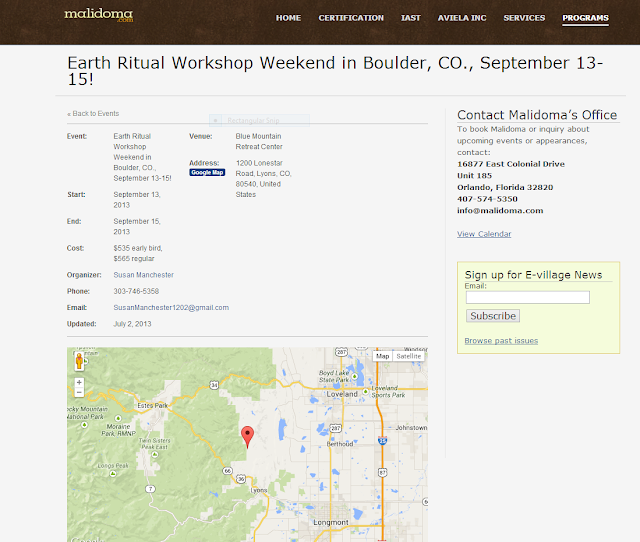 A New Ager I have kept tabs on since the beginning of my research starting in 1981 was "Theologian" Matthew Fox (born 1940).  He was born as "Timothy Fox."  Matthew was the name he adopted when he entered the Roman Catholic priesthood.   He wreaked much damage across the board in theological circles.  His influence was felt across the entirety of the New Age Movement.  His publishing company, Bear & Company, subsequently merged in 2000 to with the operations of  New York occultist Ehud Sperling, and his "Inner Traditions".  Some of the most shockingly blasphemous literature of the New Age Movement including the works of close Matthew Fox associate  Barbara Hand Clow have come from the spider like workings of Matthew Fox and his "religious" associates.

Although both Randy England (Unicorn in the Sanctuary author) and I were both rudely challenged by Fr. Matt Pacwa's then defense of Matthew Fox who was subsequently excommunicated as a Roman Catholic priest in 1993 (about time!), Fox's New Age commitments were some of the deepest held in the Movement.

One of his associates was an African by the name of MALIDOMA.  I learned this on my ongoing library review which now has included Matthew Fox's autobiographical work, CONFESSIONS OF A POST-DENOMINATIONAL PRIEST.

"Malidoma" had up until now largely escaped my radar.  Thankfully, he had not escaped CARRIE TOMKO's.  Carrie left our world on April 6, 2009, but her work lives on in her valuable archives.  You may access them by going to http://www.carrietomko.blogspot.com.

Malidoma, an African promoting African style earth worship and paganism was once a professor at the University of Michigan, only approximately 40 miles from my home.  My own work is archived there at the Bentley Historical Library.

The Promise Keepers Movement active in the 1990s and beyond drew heavily on the Men's Movement, a New Age operation largely shepherded by Robert Bly.  Robert Bly worked closely, as did Matthew Fox, with Malidoma.  Fox's autobiography CONFESSIONS opens with accounts of his conversations with Malidoma (pages 10-11, HarperSanFrancisco paperback edition, 1997)/

As that was then, I decided to see what was going with Malidoma now, and I found plenty.

This is from Carrie Tomko's accounts of this gang which includes Fox, Joanna Macy, John Seed, Earth Spirit Rising Council of Elders,

IMAGO AND CULTIVATING CONNECTIONS
are sponsoring the EarthSpirit Rising Conference once again.

Cultivating Connections and Imago are pleased to annouce that Cincinnati's own Xavier University will host EarthSpirit Rising: A Conference on Ecology, Spirituality, and Community. We live in a time of crisis-crisis of Earth, crisis of Spirit, and crisis of Community. Many of us have come to recognize that these crises are not separate, but interpenetrating dimensions that must be addressed as a whole. It is only through understanding the deep interconnections between Earth, Spirit, and Community that we will be able to transform this time of crisis into a time of hope.
EarthSpirit Rising 2005 explores the connections between ecology and spirituality through the lens of community. We recognize that without community and collective action our hope for a more ecologically sustainable and spiritually rich world will never be realized.
Matthew Fox and John Seed will be back again for encore performances. No mention of the Council of All Beings this time, though. Maybe they have decided to tone down the channeling. I wonder what Matthew Fox's "9 C's of Education" are? They have some ritual tucked into Malidoma Some presentation. They are going to talk about "Dagara cosmology"...as opposed to Catholic cosmology, one wonders?The organizers are described here. Notice down there on the bottom the Brueggeman Center for Dialogue at Xavier University? That magical word "dialogue" that exempts Catholic facilities from teaching the faith...Check out the "Conference Related Links". Foundation for Shamanic Studies???????????????They are offering a Youth Conference for ages 8-14. Wonder what sort of program is going to fall under "creative expressions"? Would you trust your kids to a bunch of conference organizers who provided a lesson in channeling called Council of All Beings at a previous EarthSpirit Rising Conference?They are having an EarthSpirit Rising Council of Earth Elders. The Earth Elders want to arrange the "transformation of human-earth relations." Did you know you can have relations with a planet? Stick with the nuns and they will guide you through "these times of great danger and great hope"...with the help of their "ally" gleaned from the Council of All Beings held at a previous EarthSpirit Rising Conference, perhaps.Look at the lineup for the "Experiential Sessions"! It would take an entire day to explore all of these presenters. I'm intrigued by the "Sacred Body, Sacred Community" presentation "inspired by nature mystics." It includes "chants and circle dances that create a deep, connecting, and healing experience of being fully in our bodies, connecting with each other in a deeply reverent way, and celebrating the mutual blessing that we are to one another and the rest of the Earth Community."


Looks like it is taking place in a Catholic University again.


It also looks like the nuns haven't shied away from sponsoring it.


IMAGO is an "earth centered" organization located near Cincinnati, Ohio.  Undoubtedly, it has close links with another Catholic New Age organization that Ohioans turned me onto starting in 1982:  Yup, just checked and Grailville's facebook page makes that close relationship clear!

This brings me to a main point of my concern with the New Age spiritualities, the Environmental Movement, etc., ad nauseum, where they are clearly headed is in no small part, mandatory Earth worship.  This is a clear theological line that we dare not cross.  The much maligned biblical Book of Revelation contains critical language in chapter 14:

6 And I saw another angel fly in the midst of heaven, having the everlasting gospel to preach unto them that dwell on the earth, and to every nation, and kindred, and tongue, and people,7 Saying with a loud voice, Fear God, and give glory to him; for the hour of his judgment is come: and worship him that made heaven, and earth, and the sea, and the fountains of waters.8 And there followed another angel, saying, Babylon is fallen, is fallen, that great city, because she made all nations drink of the wine of the wrath of her fornication.9 And the third angel followed them, saying with a loud voice, If any man worship the beast and his image, and receive his mark in his forehead, or in his hand,10 The same shall drink of the wine of the wrath of God, which is poured out without mixture into the cup of his indignation; and he shall be tormented with fire and brimstone in the presence of the holy angels, and in the presence of the Lamb:11 And the smoke of their torment ascendeth up for ever and ever: and they have no rest day nor night, who worship the beast and his image, and whosoever receiveth the mark of his name.12 Here is the patience of the saints: here are they that keep the commandments of God, and the faith of Jesus.

The New Age Movement has many rabbit holes for us to wander down, but they all lead to potential ruin and desolation.  There is no advantage -- either here or in the hereafter -- to abandon our Creator by worshipping all else and ourselves as "co-evolutionists."

This very weekend "Malidoma" is conducting a form of Earth Worship workshop which they call "Earth Ritual."  My prescription?  Be aware, but don't participate.
Posted by Constance Cumbey at 1:40 AM 325 comments: