This is from Haaretz.com, an Israeli news service.  Read it prayerfully and carefully:

"The picture is clearing up. The Arab spring is an Arab disaster. In the coming years there will be no democracy in Egypt. The choice  in Egypt will be either chaos , Islamic dictatorship or military dictatorship. I n the coming years there will be no democracy in Syria. The choice in Syria will be either a bloodbath, an Alawite dictatorship or a Sunni dictatorship. In the coming years there will be no democracy in Jordan. The choice in Jordan will be either weakened Hashemites, the Muslim Brotherhood or Palestinians.  In the coming years there will be no democ racy in Libya. There the choice will be disintegration, disorder or renewed despotism. Perhaps in Tunis ia a real change for the better will occur.
But the bottom line of the Arab spring is that the lives of hundreds of millions of Arabs will be worse. More poverty, more crime, more fear in the streets.  More oppression of women, more persecution of minorities , more hatred of the West.
Monarchies like Saudi Arabia, which thwarted the Arab spring - are now emerging as responsible states . I n contrast, the republic s defeated by the Arab spring are turning one after the other into failed states. They are tainted with fanaticism, spreading misery and c reating unprecedented instability.
The picture is clearing up. The Palestinian September is an Israeli-Palestinian disaster. The Palestinian September was conceived by two European statesmen - Bernard Kouchner and Javier Solana. Those two naive men figured if they grant international sponsorship to Salam Fayyad's Palestinian-state plan, they would force Israel to make a final-status arrangement.But the Israelis did not cave in to the pressure. The Palestinians fell in love with the plan.
The train left the station. Now, when everyone understands the train is racing to the abyss, nobody can stop it. On September 20 the General Assembly debate will begin. At the beginning of October the assembly is likely to adopt a destructive resolution. Presumably Israel will take unilateral retaliation measures and the Palestinians will go the The Hague.

You may read the entire article by Ari Shavit by clicking here:

Tonight on MY PERSPECTIVE internet radio at www.themicroeffect.com,  I will be interviewing Dr. Christopher Glenn Fichtner, M.D.  He is the author of "Cannabinomics, The Marijuana Policy Tipping Point."  Please join us and call in with your questions and comments.

CONSTANCE
Posted by Constance Cumbey at 1:54 AM 235 comments: 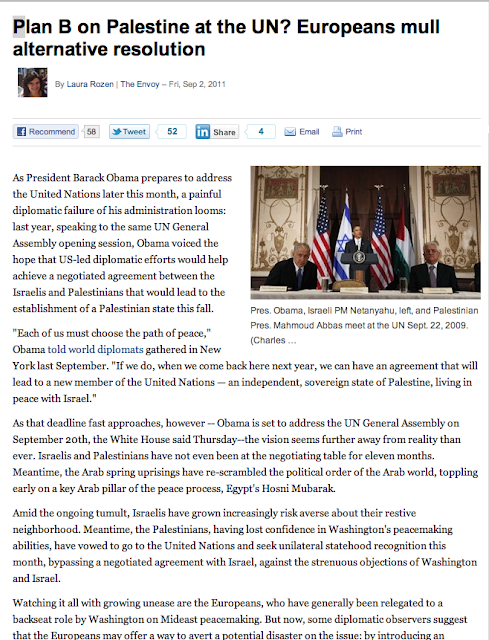 http://news.yahoo.com/blogs/envoy/plan-b-palestine-un-europeans-mull-alternative-resolution-191706340.html
Posted by Constance Cumbey at 9:29 AM 45 comments:

Last week it was first an earthquake, and then Hurricane Irene rampaging first the Bahamas and then most of the East Coast.   New Jersey, upstate New York, Connecticut, and Vermont appeared to catch it the worst in the form of unprecedented flooding.  This week it is "Tropical Storm Lee" bringing torrential rains to New Orleans.  Texas which could badly use significant parts of that downpour continues under its unprecedented drought.

Although I am not a "Tea Party" aficionado, I had to sympathize with Congresswoman Michele Bachmann taking the public media ridicule she did for saying she thought the earthquake and the then hurricane could be "signs from God."  I know many people, most of whom are much more intelligent than the scoffers, who believe likewise.  I'm saddened that Michele Bachmann didn't stick to her guns on this one.  We were warned that it would be very difficult to be a Christian in the last days.  This type of ridicule for expressing for what even the insurance industry used to call "an Act of God" is "Exhibit A" that we may well be close to there.

The New Agers will no doubt be blaming all on "global warming" or "Gaia is angry."  A couple of summers ago I went to the zoo with two friends on an "adult night."  The gift shop was open and this book caught my eyes: 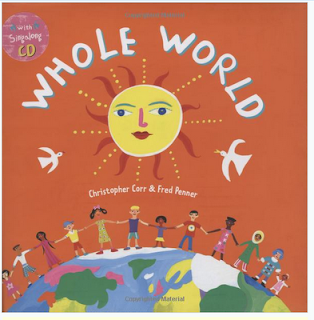 I bought the book which you can view by going to the Amazon bookstore and clicking their "look inside link."  My copy bears the "Detroit Zoo Gifts" label.  The book is a shameless takeoff on the "He's got the Whole World in His Hands" spiritual.  Instead, it teaches the children that "we are gods." It goes, "You've got the whole world" in your hands."  The Seventh Day Adventist church we attended with my mother when my siblings and I were small once had a pastor by the same name as the author, "Pastor Penner."  As I remember, he and his father were Godly, dedicated men.  The author of this book is a Fred Penner who also sings on the CD.  I sincerely hope they are not kin!  The book combines "global warming" propaganda with "we are God" themes.

The Seventh Day Adventists had "mark of the Beast" teachings that I cannot accept.  But this book has a strong imprint of a possible "Mark of the Beast" campaign.  The campaign is for both Earth Worship ("Goddess Gaia", "Pachamama") and self-worship.   The "third angel" warning of Revelation 13 contained prophecies of an angel flying over preaching "the everlasting gospel."  These days the apostates and New Agers (often they are one and the same) preaching an "ever-changing gospel."  The warning sounded was to "fear God and give glory to him for the hour of His judgment is come.  Worship God who created the heavens, the earth, the seas, and the fountains of water."

Earth worship and self-worship is so very clearly where this is headed with dire warnings that if we do not "worship Gaia", "she" will destroy us.  I think we'd better worry instead about giving glory to our real Creator and Protector, the Lord of Hosts, who thought enough about our welfare to send his only begotten Son to redeem us from the clearly prophesied wrath to come.

With that being said, my prayers are with our southern state friends who are suffering in some areas from excessive moisture and other places from insufficient rain.  Let's pray to the only one who can change the direction, as Elijah was the only one who stood before the pagan hordes in King Ahab and Queen Jezebel's day and obtained God's recognition.  Let's be part of "seven thousand men I have reserved to myself, all of which have not bowed the knee to Baal and every mouth which hath not kissed him," instead of those who then placed themselves in the path of  the divine wrath which thereafter came upon the false prophets of Baal.

Too many of us our bowing our knees to the image of the Earth, the modern day image now popular with those who would deny our Creator and our Salvation.  Let's make sure we are not in their number, unpopular as the media might now make Faith to be!

Stay safe and stay tuned!  My prayers today are especially for those plagued whether by flood or by drought in the Gulf Coast states of the USA.