Very recently, it was announced that the World Economic Center would open a, "Global Centre for Urban Transformation" in downtown Detroit, Michigan -- my own "stomping grounds" for so many years.s   The Detroit center will, per the WEF press release:  "Detroit will serve as the Centre’s global headquarters, providing a model for more inclusive and sustainable urban development."

“Around the globe, cities are facing unprecedented challenges from COVID-19 to climate change, exposing deep systemic inequities,” said Jeff Merritt, Head of Urban Transformation, World Economic Forum. “As we chart a course towards a more sustainable and equitable future, government cannot carry this burden alone; increased public-private cooperation is essential. Detroit is uniquely positioned to serve as the epicenter for this work – a hub for urban transformation and innovation that the world can look to for guidance and inspiration.”  [World Economic Forum Press Release 08/19/2021]

Jeff Merritt himself will be coming to Detroit to run this Centre.  An ominous quote from Mr. Merritt incorporated in the Detroit Free Press article about the Detroit Center which is to be THE global center for urban transformation" for WEF is "MAKE NO MISTAKE ABOUT IT -- THIS IS NOT A THINK TANK -- IT IS ABOUT 'ON-THE-GROUND IMPLEMENTATION! 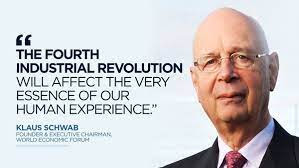 Well, what are they about implementing?  Check the following:Glob

What is the Fourth Industrial Revolution?  Per Klaus Schwab, it will come over us very quickly, like a tsunami and will change our identity, our biology, our interaction with machines.  It will incorporate human beings with machines -- and not just the computer I sit here using -- human implants  -- first in our clothing and then implanted in our bodies.  Watch the video I posted the blog article before last.

The information I just imputed to Klaus Schwab came from his own mouth at the Lee Kuan  Yew School of Public Policy and was delivered five years ago on July 13, 2016, just about the same time as the video I posted on the post before last when he said the chips would be bodily implanted within  10 years.  We are now five years into that cycle he predicted.  The video is fully watchable on YouTube.  Give the search command of "Klaus Schwab" AND "Fourth Industrial Revolution.

Javier Solana, whom I have deeply researched starting on November 22, 1995, is a major player and contributor to the World Economic Forum.

There is so much happening with the WEF, it is almost difficult to summarize, but I am becoming increasingly convinced that this is that of which I have reported and spoke since discovering the events leading to writing the HIDDEN DANGERS OF THE RAINBOW, a book that I started in 1981.

It looks like so much is now coming into focus.  The WEF has its tentacles into much -- but now they in my own neighborhood for the past 50 years for ON THE GROUND IMPLEMENTATION>

Work for the time is coming, when you can work no more as the old hymn goes.

I am am considering holding at least a zoom, if not a live physical conference on this subject and I am hoping I can get our Rich (Peterson) of Medford, Hugh McCallie of Oregon and other research stalwarts over the years to help.