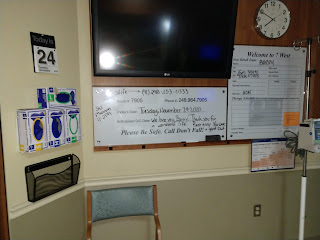 Tonight I lost my wonderful husband of 46 years (since we married November 23, 1974).  His sudden death has taken me by shock and surprise.  He had four radiation treatments and was scheduled for his last tomorrow and then was to be sent home by ambulance.  A hospital bed was installed at our house today.  Yesterday, despite the Covid-19 lockdown, I was granted a pass to come to the hospital for training on equipment to aid his planned home care.  We had a beautiful day together yesterday at the hospital full of love and good memories.  He was looking forward to coming home.  At 5:27 Eastern time today, the hospital rang my phone.  It was an unusual number for the hospital and I thought perhaps it was more from discharge planning.  I decided to call my husband's room first.  His room phone was answered by his nurse who told me his vital signs were going down and he wasn't doing too well.  They asked if somebody could drive me to the hospital immediately and I would be given a pass to come in despite the no-visitors policy.  My son drove me immediately. We arrived at the hospital at 10 of six.  As I walked in his room, a doctor was standing behind one of the curtains and the nurse who called me came out and said, "we are so sorry.  He passed five minutes ago."  I am devastated, but they told me he had a last peaceful day and did not appear to be in pain.   I am devastated and covet your support and prayers.

I am trusting that Barry is now resting in God's love and care. What his medical care team thought of him was posted on his room board and I took a picture to preserve and share it.

Posted by Constance Cumbey at 2:07 AM 41 comments:

I been offline much more than usual since posting the last piece.  We really appreciate your prayers and concern.  My blood tests showed a normal level of eosinophils rather than the ominous looking highly elevated reading fr.  Our big worry is my husband's.   I am astonished that he was hospitalized for weeks, sent to physical rehab to "learn" how to do things he had done for years while in a severely weakened  condition.  Only on the day he was to be discharged they came and did medical examination that should have taken place at the beginning -- surprise, surprise -- instead of it being "arthritis", "low blood sugar", "phantom limb pain" it was lung cancer that had been aggressively advancing.  Instead of catching it in earlier stages, it had advanced to stage 4 cancer spread into the ribs,

Barry had doctored regularly with that system and was conscientious about following physician directions..  The hospital is now recommending HOSPICE care for him.  That we even know his condition now is because I had to fight in the system.  When they came in and did x-rays on him bim before his scheduled discharge, they subsequently told him he would have to come back OUT-PATIENT in  couple of weeks for a CT Scan.  I raised a fuss with the hospital staff telling them they had the equipment, he was in the hospital, transporting a bilateral above the knee amputee was difficult if not impossible given his weakened condition -- further exacerbated by the physical exercises they were having him do in the hospital.  When I reminded them that I was the attorney who had once obtained restraining orders against their system, the order was hastily rewritten and he was given the CT scan at the hospital.  Thank God!  We still would not have known the severity of his daily worsening condition had I not done so  The CT scan revealed a lung mass with spread to his rib cage and elsewhere.  They ordered an out-patient biopsy, something I also objected to, but it became inpatient as Barry weakened at home to the level that he once again had to be transported to the hospital by ambulance.  The CT scan and biopsy were advanced by two days and were done in-patient  A thoracentesis was done with removal of 1.25 litres of yellow substance removed from his lungs and it was definitely dangerously advanced stage 4 lung cancer.

I have been completely consumed by this situation the past few weeks.  Barry has been a good and supportive husband to me over the now 39 1/2 years I have been educating people on the now not so hidden dangers of the New Age and related movements.

Posted by Constance Cumbey at 6:10 AM 47 comments: