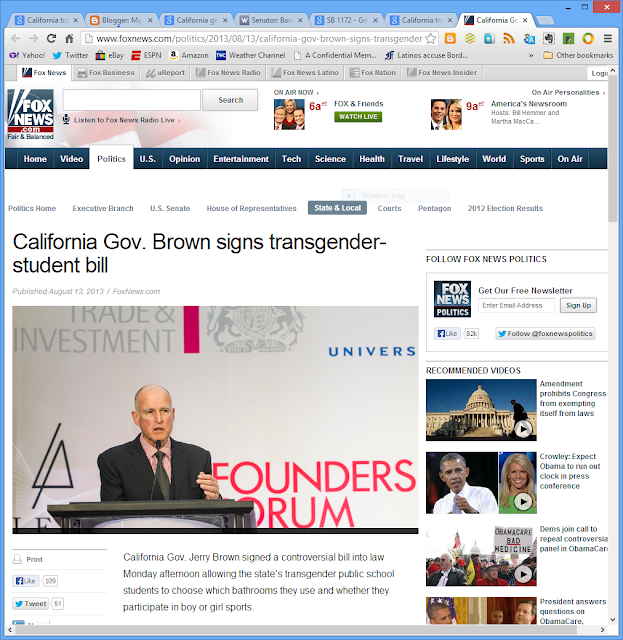 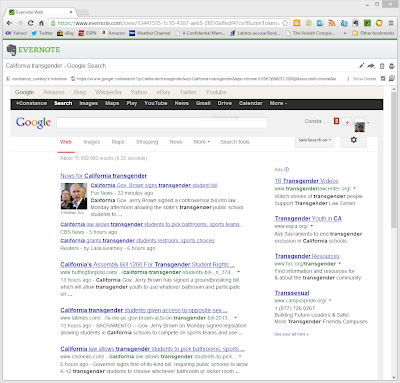 Just about the time you think it can't get much worse, it does!   Jesus reminded us that the biblical last days would be likened both to the days of Noah and the Genesis flood as well as to Sodom and Gomorrah.  I rather suspect that even Sodom and Gomorrah condemned residents might have blushed at current events in California these past few days.  After all, they had Abraham's cousin Lot "sitting in their gates," i.e., being the local Judge.  They knew he disapproved of their deviant activities.   California is apparently disqualifying all with frowning views on such  as ineligible for even parenting -- let alone judging.

California Governor Jerry Brown has just signed into law a most preposterous bill -- a bill that to my trained legal eye looks like the ultimate in child abuse itself -- billed as one to "protect transgendered children" (or those perceiving themselves as same).  The bill currently endangers all others and those allegedlly "transgendered" children themselves who more likely than not are the victims of the childhood exploiters who would convince highly suggestible children that they are something other than the good Lord above packaged them.  Now your little girls must share gym facilites and restrooms with little boys who suddenly proclaim themselves as little girls despite their outward genitalia.  Your little boys must likewise share with little girls who do likewise.  And California law passed last year prohibits parents from seeking counseling for their children against this unseemly suggestibility!  And they have the nerve to call it "progressive"!

And should a California parent try to protect his or her precious little ones from the obvious psychological abuse from others of his child that has resulted in the child having these opinions that he (or she) is not as the good Lord created him to be, such counseling about the child's true "gender orientation" is illegal, too!  Governor Jerry Brown signed that bill, California Senate Bill 1172 into law on September 30, 2012.  It went into effect on January 1, 2013.  You may read that bill as signed by the Governor in its ugly entirety by pressing here.

It is not hard to imagine a scenario -- probably undoubtedly existing -- where hordes of LGBT militant activists will be patrolling and spying on parents via New Age techniques of school homework "journaling" assignments to ferret out parents who dare defy or counsel their children.

Jesus clearly warned as recorded in the Book of Matthew that it would be better for somebody to be hung around the neck with a millstone and drowned than to suffer the eternal fate of one causing a child to go astray.  (Matthew 18:6)  Isaiah clearly warned "woe to those who call evil good and good evil."  (Isaiah 5:20-21).

I wonder if California Governor Jerry Brown still perceives of himself as a good Catholic Christian?  I wonder how long until the President will applaud the California legislation?  I wonder of the old hymn that goes "how long, Lord Jesus, how long, how long, till we sing the glad song, Christ returneth."

I can remember reading nothing in apocalyptic novels or end time movies that even remotedly approached the obvious wickedness in this legislation that under the guise of "protection" leaves our small children to the predations of the so-called "LGBT community".

May the Lord help us all.  May the Holy Spirit impress upon those promoting these measures that their eternal bodies and souls may be at everlasting risk.  There is still room and time for repentance, but maybe not much!