To my readers:  Our long-time "Rich of Medford" known in real life as Richard Peterson and I have held many long and serious conversations on New World Religion developments.  One of the three main goals of the New Age Movement that I have observed and documented starting with my discovery of same in 1981 is their push for 3 main items:

Alice Bailey wrote at length in her The Externalisation of the Hierarchy about these aims.  The New World Religion and a shared belief in interconnection of everything and "the only sin is the sin of separation" were central, she said, to the world's coming acceptance of "The Reappearance of the Christ".

Richard Peterson has rightfully observed that courageous Archbishop Vigano has been giving solemn warnings that this may now be occurring with help from the present head of the Holy See -- the Vatican -- Pope Francis.  I invited him to use my forum to convey his     perspective on Archbishop Vigano's recent statements and actions.

by Richard Peterson (Our 'Rich of Medford')

Recently Catholic Archbishop Carlo Maria Viganò penned this warning that the Deep State and Church will bring about a new world religion and order.  His piece struck a chord with me.  It verbalizes much of what I had previously written regarding interfaith initiatives and religions’ role in the war against terrorism.  The Alliance of Civilizations and its implementation partners advanced themes such as religion would be used to dismantle undesirable religion; the separation of church and state would be set aside; religious exclusivists would be forever banished.

While I am not Catholic, both the internal and external pressures Viganò writes of soon will affect all of Christendom.   They already have.  Apostasy within Protestant denominations with its war upon fundamentalism has been fully on display for quite some time.  We need to take Viganò’s warnings seriously.  What happens within the Catholic church will reverberate across Christendom and carries with it implications for all.

Are we living in the end times?  I think we are.  Sean Kelly, professor at the California Institute of Integral Studies, believes so too as he writes we are living in the end times.  His perspective is Biblical only in the sense that what he prescribes for remedy is what Revelation 13 – 14 warned us not to do.  Kelly’s book Becoming Gaia, On the Threshold of Planetary Initiation proposes a salvation rooted in technological convergence – a singularity – which will “pull the earth away from the abyss.” 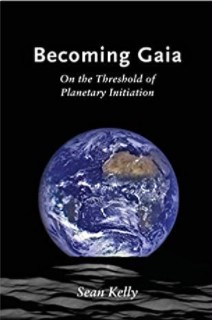 Archbishop Viganò sounds the alarm that Pope Francis has engaged in a war upon the church’s traditionalists.  In this war, he says, the pope is doing what he does best:  demolition. Ubi solitudinem faciunt, pacem appellant,” making a wasteland and calling it peace:

“His dual role as pope and liquidator of the Catholic Church allows him on the one hand to demolish it with decrees and acts of governance, and on the other hand to use the prestige that his office entails to establish and spread the new religion over the rubble of the old one.”

Viango’s warning conveys a sense of urgency which I’ve similarly observed in recent writings of other Catholic traditionalists; the same sense of urgency conveyed from an era when the church experienced harsh persecution.

One traditionalist is Archbishop Schneider.  His piece The Gift of Filial Adoption (The Christian Faith: the only valid and the only God-willed religion) is a response to Francis’ signing of the Human Fraternity Agreement which places Christendom on equal footing with the other world religions.

“The Apostles and the countless Christian martyrs of all times, especially those of the first three centuries, would have been spared martyrdom, if they had said: “The pagan religion and its worship is a way, which as well corresponds to the will of God.”

“No authority on earth – not even the supreme authority of the Church – has the right to dispense people from other religions from the explicit Faith in Jesus Christ as the Incarnated Son of God and the only Savior of mankind with the assurance that the different religions as such are willed by God Himself. “

Pope Francis’ inclusiveness permeates well outside the bounds of religion itself.  Karen Armstrong of the Alliance of Civilizations, I suspect, had a sense of satisfaction as she published one of Francis’ heretical demolitions on her Charter for Compassion website:   that atheists need not worry about hell.  The Charter for Compassion was launched by Armstrong as a means to provide religions with “guidelines” on how we are to interpret those “religious texts which are being abused.”  Armstrong is especially hostile towards Christianity.  She attributes scriptural abuse to those who look upon Jesus as divine.   Armstrong’s theology includes  arguments such as the Biblical God is a lying God.

There is concern amongst Catholics that something is amiss, a sentiment recognized by Viganò:

“We have come to the point that even simple people with little knowledge of doctrinal issues understand that we have a non-Catholic pope.”

My Catholic friends have voiced to me suspicions that Francis is the “anti-pope” whom they identity as the same false prophet from the book of Revelation.  Viganò expresses this same chilling suspicion as he critiques the new world religion and state as operating along parallel lines:

“On the other hand, constructing a media version consistent with the system, to be repeated ad nauseam in order to indoctrinate the masses, is the recurring element not only in the ecclesiastical sphere but also in the political and civil sphere, so that it appears with disconcerting evidence that the deep church and deep state are nothing other than two parallel tracks which run in the same direction and have as their final destination the New World Order, with its religion and its prophet.”

This current condition plagues not only the Catholics but Protestants as well.  For quite some time now evangelical Christianity has engaged in a courtship with the state.  The word escorts may better describe the faith leaders who engage in such activity.

One need only look at some of the more prominent interfaith initiatives to observe the conjoining  of church and state.  The Abrahamic Family House, for example, is funded by the United Arab Emirates and has the full support of the Vatican and Alliance of Civilizations.  The German government and EU have reportedly contributed $37 million toward House of One’s $57 million price tag. House of One’s board has a strong political presence. 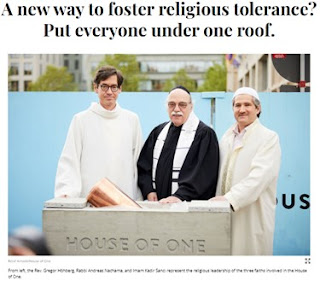 “It’s urgently necessary to enlighten the religious-exclusives, those people who believe their way to God is the only right way. This project forces them to question those thoughts, and to think about diversity within religion”

Even if we are not near the prophetic end-of-days era, Christendom appears to be headed down the same dangerous path it had travelled once before.  From history we have a range of warnings from which we may heed; from Dietrich Bonhoeffer to Mit brennender Sorge, the latter being read out from Catholic pulpits across Germany during a time of heavy persecution.

“Whoever exalts race, or the people, or the State, or a particular form of State, or the depositories of power, or any other fundamental value of the human community - however necessary and honorable be their function in worldly things - whoever raises these notions above their standard value and divinizes them to an idolatrous level, distorts and perverts an order of the world planned and created by God; he is far from the true faith in God and from the concept of life which that faith upholds.”

Today, as back then, Christendom resembles the same makings of Germany Christianity whereas the religion had only a veneer of Christianity.  Apostate and Theosophically-influenced the religion became unrecognizable.  Today, as then, I expect we’ll see a split among the faithful.

Archbishop Viganò’s warning suggests the hour is late.  Future messages may well resemble those from the prior era.  Again, from the encyclical:

“At a time when your faith, like gold, is being tested in the fire of tribulation and persecution, when your religious freedom is beset on all sides, when the lack of religious teaching and of normal defense is heavily weighing on you, you have every right to words of truth and spiritual comfort from him whose first predecessor heard these words from the Lord: "I have prayed for thee that thy faith fail not: and thou being once converted, confirm thy brethren" (Luke xxii. 32). 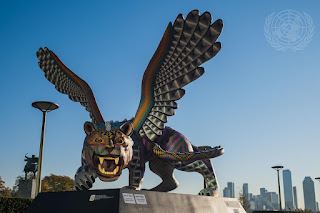 Rich of Medford (Richard Peterson) called me yesterday to call this to my attention.  It is a statue donated by Mexico to the United Nations where it sits at the Visitors' Plaza in New York City.  Read Daniel 7 and Revelation chapter 13.  The Watchman on the Wall website
Below is a tweet from the United Nations about this statue: 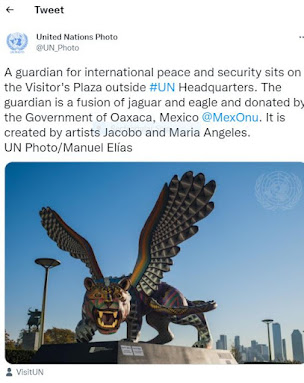 I do not fully agree with the fine watcher who posted the attached video as he says that the rapture will precede the Anti-Christ as I believe 2nd Thessalonians,  chapter 2 plainly says the opposite -- that the "gathering together" will not occur until after the Man of Perdition is revealed; however, he has otherwise a very excellent analysis of the statue.  As to the statute an Mexico's donation of same, was it intentional?  Are they pulling our chain?  Given the history of Mexico between 1926 and 1935 and the hideous persecution of Cheristians that occurred then, it could well be both.  But at any rate, I believe this is a very telling sign of the times.  Here's the video and a link to same:
Yes, it seems to be happening -- rapidly!
Stay tuned!
Constance
Posted by Constance Cumbey at 1:26 PM 316 comments: