Quoting from the King James Bible, Jesus warned when his disciples asked what should be the signs of his coming and of the end of the world that there would be, inter alia, "earthquakes in divers (many) places AND UPON THE SEA DISTRESS OF NATIONS."

Certainly, we have seen a great deal of "distress of nations" along the various world seas, including but not limited to the 2003 tsunami that violently struck many Asian nations, many Florida hurricanes;  Hurricane Katrina hitting the Gulf Coast and nearly destroying New Orleans in 2005.

Now our prayers need to be with the  projected one third of the United States that is said to be at potential risk from the lethal combination of Hurricane Sandy colliding with a cold front that could bring extreme rain, snow, and flooding to the eastern 1/3 of our country, even posing a potential threat to the Great Lakes region of which my part of the country is classified.

The storms are expected to threaten Massachusetts starting tonight, Sunday, October 27, 2012.  One of our most diligent contributors to our discussion board is Springfield, Massachusetts resident Susanna.  She and her husband faced tornado hazards a year or two ago.  Now they are probably occupied with preparations for this potential regional disaster.

We need to pray, be prepared to extend necessary support and relief supplies for those in this affected area. We also must soberly consider it as a grave "sign of the time."  Just maybe, atheist scoffing not withstanding, God is trying to send us a message -- e.g,  'WAKE UP'!

May the Lord help us all, especially those in these gravely affected areas.  I pray that the storm will turn back to sea or lose intensity.  However, we must always remember that God has the big picture and we the little ones and our most constant prayers should be "Come quickly, Lord Jesus" and "thy Kingdom come, Thy will be done . . ."

P.S.  AND THIS JUST IN:  TSUNAMI WARNING ISSUED FOR SOUTHERN ALASKA -- VIOLENT EARTHQUAKES OFF THE WESTERN CANADA COAST -- TSUNAMI WARNING EXTENDS TO WASHINGTON AND OREGON COASTS!

CONSTANCE
Posted by Constance Cumbey at 1:46 AM 323 comments:


Here it comes -- just when you thought it was safe to go back in the water! 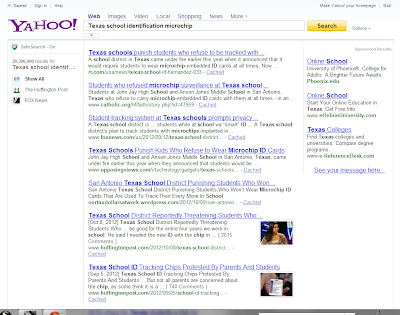 The evening news had interesting leads -- somebody made a successful free fall jump to New Mexico desert country from outer space, discussion of the upcoming second Presidential debates, etc.  Then one caught my very disturbed attention.  Did a Texas school go too far?  This time it appeared ACLU was coming out on the side of the angels -- it vehemently said the school had crossed the line.

Interestingly and characteristically, however, the ACLU decided that Christians protesting being forced to wear the badge did not qualify for their legal advocacy -- that group did not meet their criteria!

Kirsten Bokenkamp of the ACLU told the San Antonio Express-News earlier this year that her organization expected to challenge the board’s decision to use the tracking system, but the school went ahead with the program undeterred. Steve Hernandez told WND that he approached the ACLU abour representing his daughter’s case, but Rebecca Robertson of a local branch of the organization said that, “the ACLU of Texas will not be able to represent you or your daughter in this matter,” saying the case did not meet the group's criteria.{1} 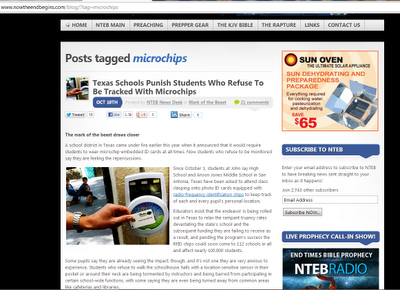 What happened?  The school gave every student a required microchip tracking badge that they were required to wear on their person at all times -- at least during school hours and school related activities.

The more discerning students were somewhat less enthusiastic.  They saw no reason why they should be treated as criminals with every move under surveillance.  Students refusing to wear the badge faced severe retaliation   You can read about it by clicking the link at the top of this story.

The NBC news I watched that was carrying the story showed one brave Hispanic father clutching his well worn Bible obviously at or near the location of the back of the Bible -- just about where one would find Revelation 13.  The press explained that he had "religious objections" to the program.

The network news prime time story (Sunday, October 14, 2012, 6:30 p.m. Eastern time) concluded by saying that like it or not, it appears the microchip identifiers were here to stay.

Query:  how long until somebody decides something needs to be done about the dissenters who won't voluntarily wear the badge as a condition of buying student textbooks, attending classes, attending football games, buying lunch in the cafeteria, etc., etc.????  Well, if the information you can read in the two stories attached to this link is accurate, I think we can all guess.