In my life and its memories, I have seen Presidents come and go.  My personal recall goes back to the last days of the first Truman administration.  He had entered office as a Vice President and became President when Franklin Delano Roosevelt died in 1945.  My personal memories of hearing the radio discussions about the upcoming election stem from 1948.  Truman was expected to become a "lame duck" in 1948, but it did not happen.  Truman went to bed with news that Dewey had won.  He awoke to learn that he, instead had prevailed.  Truman was succeeded in 1952 by Republican Dwight David Eisenhower.   My parents paid attention to that election where they had voted for Eisenhower in the first election and the Democratic candidate in the 1956 election.

President Eisenhower was succeed by the candidate of the opposite party by Democrat John Fitzgerald Kennedy.  That was 1960.  I was a Junior in high school.  I do not remember public rancor and anger during that transition, even though Richard Nixon, Eisenhower's Vice President had a surprise loss.  The Kennedy years were brief with his tragic assassination in Dallas on November 22, 1963.  He was succeeded by Lyndon Baines Johnson, his Vice President.  Johnson was re-elected over Barry Goldwater in 1964.  The years to follow were tumultuous and very reminiscent of what is happening now.   Lyndon Johnson was exceedingly unpopular among many Democrats and did not seek re-election for what would have in effect been a third term in 1968.  Richard Nixon instead was elected.  Although the times were turbulent and the Cold War was on, I do not recall an ugly transition period -- at least in my then perception.

President Nixon was re-elected in 1972.  There was turbulence, but that turbulence seemed to stem more from Nixon's insecurities, the ongoing Vietnam War, and what was shaping up that we came to know as "Watergate."  Gerald Ford succeeded fallen and disgraced former Vice President Spiro Agnew in that office and then became President of the United States upon President Nixon's resignation in disgrace.  Although times were turbulent indeed, I do not recall an ugly transition period when Jimmy Carter took office as President of the United States (POTUS).  I do not recall, however, the December 1976 through January 1977 being an ugly or tumultuous period in terms of the Presidential succession.

Carter was a one-termer, having been defeated in 1980 by Ronald Reagan.  Although Democrats were saddened at the loss, I do not recall the transition period being an ugly one.  Ronald Reagan after serving two terms was succeeded by his Vice President George H. W. Bush who served only one term as President after having served two full terms as Vice President.  William Jefferson Clinton was elected President.  Although the Republicans were disappointed, I recall the inauguration and transition period proceeding smoothly and cooperatively.

There was real turbulence in 2000 when Vice Presidential Albert Gore and George W. Bush's races collided.  There were angry and politicized Supreme Court challenges that fell in favor of George W. Bush.  Nevertheless, the transition proceeded smoothly despite the rancor.

Then we came to 2008 when Barack Obama and Hillary Clinton had a tumultuous primary race where Obama prevailed.  Obama was elected President over John McCain his first term and over Mitt Romney his second term.  The Bush-Obama transition went smoothly.

Now we come to the very last days of the Obama Administration.  Suddenly, globally precipitous moves are made by the outgoing administrtion, obviously designed to make the transition anything but smooth.  President Obama, in his declining days, it appears, has made war on both Israel and Russia.  I don't get classified briefings, nor do I know what the full facts are, but it is a safe bet that both countries have been actively spying on the other -- but the accusation that Hillary's defeat blamed first on FBI director James Comey and now on "the Russians" is unique in our history, at least as my personal recall goes.

It is my impression for better or for worse that what Barack Obama is doing is working actively to prevent a smooth transition of power and to create a far more dangerous world for Israel and for the United States than existed before.  The actions against Russia are provocative to say the least.

My prayer is that Russia does not take the bait!  May the Lord help us all!

According to a report from USA TODAY, ISIS/ISIL has issued a list of USA churches to be targeted for holiday attacks. 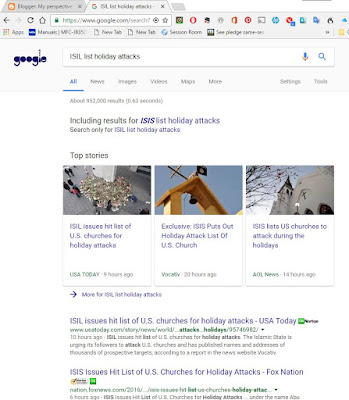 Quoting from its article, we read:  The Islamic State is urging its followers to attack U.S. churches and has published names and addresses of thousands of prospective targets, according to a report in the news website Vocativ.

Messages posted in Arabic to the group’s “Secrets of Jihadis” social media site called "for bloody celebrations in the Christian New Year." The post, under the name Abu Marya al-Iraqi, said the Islamic State, also known as ISIL, hopes to tap lone wolf attackers to “turn the Christian New Year into a bloody horror movie,” Vocativ reports.
The series of messages appeared on Telegram, a messaging app that allows users to send encrypted messages to one another. The group also uses social media to provide instructions on constructing and igniting explosives.
The information on U.S. churches was based on information already available online and includes a public directory of churches across all 50 states, Vocativ said.
Another post urged followers to attack churches, hotels, crowded coffee shops, streets, markets and public places and provided some examples in the U.S. Canada, France and the , Vocativ said.
This is sobering news indeed.  It also reminds me of the ultimate New Age strategy of pitting target groups against each other.  Alice Bailey wrote in THE EXERNALISATION OF THE HIERARCHY (page 545):

"That the Jews should be rid of fear is of major

importance; that they should know and recognise the Christ

as the Messiah, and therefore find for themselves that the

religion they follow is destructive of many of the finer

values, is likewise of major importance; that orthodox

Judaism, along with all the other faiths, should realise

that there is no desire to make them Christian (in the

ordinary sense of the term), but that they should all move

tOWards some loving synthesis and eliminate their mutual

antagonisms and rivalries is equally urgent, and this statement

includes the Christian faiths as well. That the Vatican

cease its political scheming, its exploitation of the masses

and its emphasis upon ignorance is as important; that the

manifold divisions of the Protestant churches be bridged is

imperative. If none of these things happen, humanity is

headed towards a religious war which will make the past

war appear like child's play; antagonisms and hatreds will

embroil entire populations and the politicians of all the

nations will take full advantage of the situation to precipitate

a war which may well prove the end of human history."


It looks like that religious war is here -- or at least credibly threatened.

CONSTANCE
Posted by Constance Cumbey at 2:19 AM 92 comments:

Democratic Party McCarthyism (Joseph -- not Eugene) for the 21st Century

Update:  Today the Electoral College votes were cast.  The news is that Donald Trump did receive the 270 votes plus needed despite the long and loudly orchestrated campaign to threaten electors against casting votes for the winner of the popular votes of THEIR INDIVIDUAL STATES in favor of Hillary Clinton who allegedly won the "popular vote".  Harvard Professor Lessig's campaign was evidently and thankfully unsuccessful.  How will Trump do as President?  Time and events will tell.  This was an election year when we had to make difficult choices.  Supreme Court appointments were paramount in my own decision-making.

On the European front, there was deadly terrorism both in Germany and in Turkey.  The Russian ambassador to Turkey was publicly assassinated and all could view that event on televised video recordings.  Just as the Democratic Party accusations of Russian connections with the GOP remind me of the McCarthyism of the 1950s, today's events ominously remind me of the start of World War I and the Sarajevo assassination that triggered the lineup of European powers against each other.

I'm old enough to remember the unpleasant days from my childhood when the "Cold War" started, Joseph McCarthy accused practically everyone and their brother of having Moscow "Red" links, and "Russian connections."    Back in those days, it was often the Republicans making the charges against the Democrats that they called "fellow travelers" to alleged Communist influencers.

Well, here we are in the 21st century, nearing the end of the second decade of same, no less.  The current administration of the United States Executive Branch, i.e. President Barack Obama was shown during the latter days of his first term assuring the Russians that he could work much more closely with them once he had been re-elected.

And so there was "peace on earth" or so it illusorily seemed.

All that appeared to change in my eyes once Barack Obama who once espoused marriage as between a man and woman then publicly "evolved" his view to one of "marriage equality", i.e. man marries man, woman marries woman.  The winter Olympics were set to be held in southern Russia.  The conservative Russian Orthodox community promoted laws passed by the Russian government outlawing "homosexual propaganda."   The United States sent openly "gay" members to Russia to represent the United States government in the Olympic doings.  Vladimir Putin said to the USA and to all that "gay" athletes were welcome to come but "please leave our children alone."

Maybe coincidence, maybe not, but suddenly the "Cold War" was back on and heating up at that.  EXCEPT this time the accusers were generally Democrats accusing Republicans and Evangelicals of being "Russian sympathizers."  At an annual Press Association "roast", Barack Obama cynically stated that conservatives liked Vladimir Putin.  Perhaps he was referring to some of Pat Buchanan's public observations -- perhaps something else.  After all, I don't get "classified briefings."

That the intelligence services of the USA appear at least superficially to this observer to have been to at least some extent "politicized",  I am more than skeptical about the late claims reached by "consensus" (mostly Democrats with dissenting Republicans).  That John McCain is angered and perhaps holding a grudge against Donald Trump is understandable.  Senator Lindsay Graham is no great surprise either.

Suddenly, Barack Obama demands an investigation to be completed before his rapidly expiring term of office ends.  And now today, we read from an on-line news source, "The Hill" in major news presentations from MicroSoft, the following:

At least 10 members of the Electoral College are asking U.S. intelligence officials for more information on ongoing investigations surrounding President-elect Donald Trump's relationship with Russia.The electors, including the daughter of Democratic Leader Nancy Pelosi, Christine Pelosi, wrote an open letter to Director of National Intelligence James Clapper asking for the information ahead of their Dec. 19 meeting to vote for the next president."The Electors require to know from the intelligence community whether there are ongoing investigations into ties between Donald Trump, his campaign or associates, and Russian government interference in the election, the scope of those investigations, how far those investigations may have reached, and who was involved in those investigations," the letter read. "We further require a briefing on all investigative findings, as these matters directly impact the core factors in our deliberations of whether Mr. Trump is fit to serve as President of the United States."Nine democrats and one Republican signed the letter."Separate from Mr. Trump's own denials of Russian involvement in the election, the confirmed communication between Trump's aides and those associated with the Russian election interference activity raise serious concerns that must be addressed before we cast our votes," the letter read.