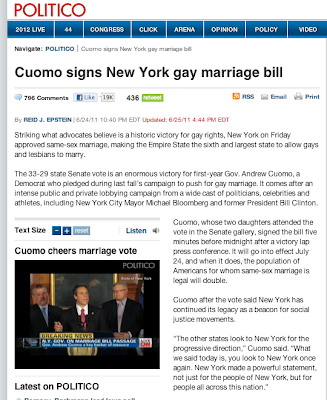 These days, given same sex marriage, something I never thought I would live long enough to see, I just can't get that excited about polygamy, whether Mormon or Moslem.  New York Governor Andrew Cuomo, enthusiastically praised the bill allowing same sex marriage for the State of New  York.  Last night he signed it into law.  Last February, a Vatican spokesman suggested Cuomo should be denied Church communion he was living with his girlfriend.  Given the magnitude of the thousands of years of cultural and religious mores he and confederates upset, how much more should he be denied his Church's communion sacrament for interfering with the institution of marriage, "ordained of God for proper channeling of affections and for continuation of the family." 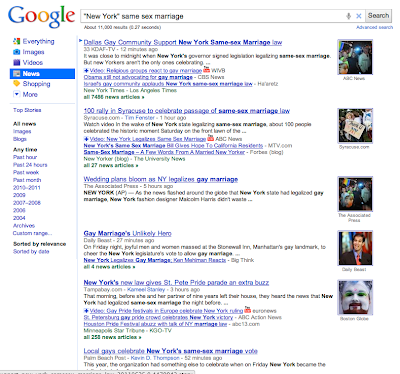 Frankly, I don't know how much worse things can get.  I am deeply fearful of God's wrathful and deserved judgment against our society for such open flaunting of his laws.  Our noses have been rubbed in the homosexual agenda for years.  Now the awful smoke of what God plainly in his word repeatedly labeled an "abomination" must be rising to the heavens.

May the Lord help us all.  We are worse than Sodom and Gomorrah.  They had as their judge, Abraham's cousin, Lot who "sat in their gate" with his "righteous soul vexed" by the abominations he witnessed.

These days those opposed to gay marriage and flagrant flaunting of thousands of years of cultural norms are usually disqualified from "sitting in the gate" (serving as judge, governor, mayor, whatever).  At least Sodom & Gomorrah allowed one in open disapproval of their lifestyles to serve in public office.

These days we fine baseball players and media personalities for expressing disapproval.

UPDATE AND CORRECTION:  The "conviction" was for "NEGLIGENT HOMICIDE."  That is a lesser included offense to the more serious charge of manslaughter for which James Arthur Ray was originally charged.

The wealthy New Age "transformation" promoter of Sweat Lodge techniques was charged with three counts of Manslaughter but was convicted of the lesser crime of "negligent homicide" in the Arizona courts.  The judge presiding over the case denied the prosecution motion to take him into custody immediately.  Ray is now awaiting sentencing.  You can read more of the details here in this Associated Press article carried in a London online newspaper account. 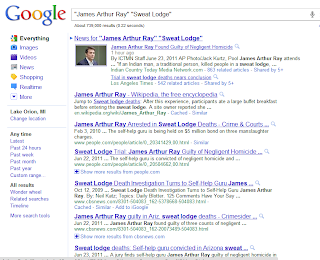 In the past, James Arthur Ray has been a guest on the Oprah Winfrey Show.  Guests paid $9500 for the "privilege" of being tortured in a "transformational technique" Ray himself described as "hellacious."

That it was!  Two people died at the scene and another 19 were injured in his 64 person sweat lodge "experience."  Another victim, one of the injured 19 persons, died after a week of being comatose.

If that's what they call "higher consciousness," I for one definitely DO NOT WANT IT!

CONSTANCE
Posted by Constance Cumbey at 12:08 AM 22 comments:

The ETHICMark?? (ETHICMARK) of the WORLD BUSINESS ACADEMY -- CREEPY MARK FROM AN EVEN CREEPIER ORGANIZATION 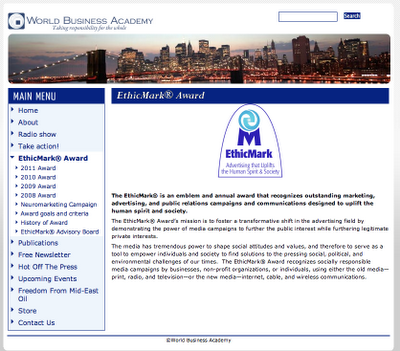 Remember Gold Lake, the Institute of Noetic Sciences, and Paul N. Temple?  What activists on this blogspot forum could ever forget those items?! 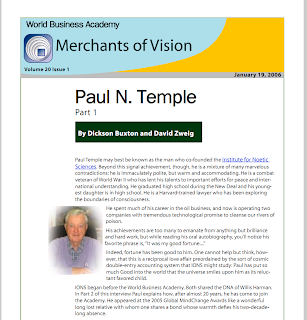 Of what both "emerging church" and New Age / "Global Civil Society" people now call THE SHIFT we find the above pictured "THE MARK" which looks astonishingly like a combined swastika and sixes.

Here is a list of current fellows of the World Business Academy.  Many are old familiar names to us.  You may want to consider NOT BUYING from those displaying "the mark," after, of course, politely telling them while you do not wish to support THIS CAUSE.  Remember the good old days of "The Better Business Bureau"?  This is not exactly the same thing!

Well, "the mark" appears just in time to support the cause championed by Prince Charles in my immediately preceding blogspot posting.


Read carefully below and stay tuned!

Posted by Constance Cumbey at 8:02 AM 70 comments: