This September marks the third anniversary of the United Nations Alliance of Civilizations launching its Plan of Action for the Safeguarding of Religious Sites.  First, a brief introduction for those not yet familiar with the Alliance.

The UN Alliance of Civilizations is an initiative which was introduced in 2005 by Spain and Turkey. Its political origins date farther back. The Alliance’s declared purpose is to combat polarization and extremism worldwide in order to counter the “clash of civilizations” and negate it with a partnership among civilizations. The Alliance is said to be the “mother tongue” of the UN system. It is a primary component of the UN Global Counter-Terrorism Strategy. The Security Council’s statement on the Partnership Among Civilizations reads “this partnership will represent a powerful response to those who feed on exclusion and arrogantly claim the sole ownership of truth.” (A/60/341–S/2005/567, September 2005) 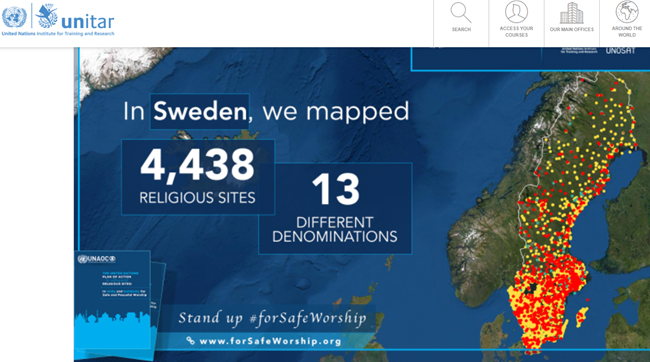 Should one accept at face value what is written within the Plan of Action it may sound reasonable. It is difficult to quarrel with a plan which proposes the safeguarding of religious adherents from terrorist attacks. The expressed values of human rights, democracy, peace, the rule of law are ones most would embrace. But what if the language is a veneer which conceals an entirely different political platform? I have written critical assessments of the Alliance of Civilizations since 2006 so I propose there exists an underlying agenda which looks entirely different.

The primary composition of the Alliance is the High Representative and the High Level Group of eminent religious scholars.

During the 2006 Alliance Doha Debates, High Level group members were asked to define extremism for the rest of the world. This definition becomes important as one assesses the Alliance since extremism – the root cause of terrorism – is the target. John Esposito defined extremism as one who believes his or her religious beliefs to be right and another’s to be wrong. That individual, he said, has adopted the “theology of hate.”  The late Archbishop Desmond Tutu defined extremism as those who hold their [religious] views exclusive. The Alliance of Civilizations is especially hostile towards Christianity.

Now align the Alliance’s definition of extremist thought with the words of Jesus in John 14:6:  “Jesus saith unto him, I am the way, the truth, and the life: no man cometh unto the Father, but by me.”

High Level Group member Karen Armstrong lectures that religion has been hijacked by religious extremists who are abusing religious texts. At the launch of her Charter for Compassion (an interlocking initiative with the Alliance), she proposed bringing together all faiths whereby guidelines would be written for how we are to interpret those abused scriptures. Exactly what constitutes abuse?

I once was forwarded an email from one of my New Zealand readers. The email was a response to concerns he expressed to his Minister of Foreign Affairs Winston Peters regarding the Alliance of Civilizations. Mr. Peters assured this reader Christians had no cause for concern because the High Level Group had Christian representation, namely Karen Armstrong and Archbishop Desmond Tutu.

Karen Armstrong’s representation is less than stellar. In her book In the Beginning:  A New Interpretation of Genesis, Armstrong expresses theological twists of the absurd. She portrays God the Creator as a perpetual liar, the evil one, while arguing that the serpent was so much more truthful. During an interview with Share International (a voice for the occult organization Lucis Trust), Armstrong argues that Christians have  wrongfully attributed divinity to Jesus. Similarly, the late Desmond Tutu wrote in God Has a Dream, A Vision of Hope for Our Time that God gave the poor serpent a raw deal (finding himself at the end of the line there was no-one left to pass blame). The archbishop’s writing continued with the admonition that Jesus was never bodily resurrected.

As I first read of the mappings of religious sites, my first thoughts were that ultimately this will serve to subjugate religions. Preceding the 2005 Alliance of Civilizations launch, hearings were held to determine the shape of the initiative. (Note that Lucis Trust was a participant.)  The outcome document envisions a future where religions be held accountable to an overarching authority:  “religions and the institutions that represent them cannot be banned from the public sphere but must be brought in under the leadership of the international civil bodies when it comes to questions concerning mutual recognition, universal justice, and lasting peace.”  Literature from other interlocking initiatives envision the same. One such initiative is the OSCE:  the Organization for Security and Cooperation of Europe. The OSCE is an Alliance of Civilizations implementation partner. The United States is an OSCE signatory nation as well as an Alliance Partner.

While serving as Spain’s Minister of Foreign Affairs in 2007, Miguel Angel Moratinos also chaired the OSCE.  The OSCE’s Annual Report focused on counterterrorism by means of interreligious and intercultural dialogue. The report’s concluding remarks include:

“However, claims to exclusive truth and absoluteness threaten to damage or even wreck the dialogue of religions. Believers and religious leaders often fear a weakening of their own religious sensibilities if other faiths are accepted as potential pathways to “ultimate truths.” The insistence on the exclusivity of a single true way to salvation devalues other religious paths and makes dialogue considerably more difficult. Respect and tolerance with regard to other religions is, however, a fundamental prerequisite for interreligious dialogue and co-operation. And yet real respect begins when I can assert my own personal religious truths for myself while accepting another’s differing religious truth and conviction as authoritative and valid without restrictions for him.”

Miguel Angel Moratinos presently holds the position of High Representative for the Alliance of Civilizations.

Several years have passed since I last wrote of the Alliance of Civilizations. The purpose of this piece is to remind readers that while the initiative may have diluted its public profile, it has not gone away. The Plan of Action illustrates it has strengthened.