There are 3 major aspects of the New Age Movement:  New World Order; New World Religion; and a messianic figure to head both.  Its toolbox is mysticism, ie, "alterered states of consciousness."  You may hear it described as "meditation." Its economic system as described in the seminal writings of its mothership organization is a type of moneyless barter and exchange system -- the wikipedian definition of "Socialism" is

A socialist economic system is based on the organizational precept of production for use, meaning the production of goods and services to directly satisfy economic demand and human needs where objects are valued based on their use-value or utility, as opposed to being structured upon the accumulation of capital and production for profit.[6] In the traditional conception of a socialist economy, coordination, accounting and valuation would be performed in kind (using physical quantities), by a common physical magnitude, or by a direct measure of labor-time in place of financial calculation.[7][8] Distribution of output is based on the principle of to each according to his contribution. The exact methods of resource allocation and valuation are the subject of debate within the broader socialist calculation debate.

Socialism and New Age beliefs are almost inextricably linked.  Once folks are plugged into the New Age mindset, they come to view its components as religion -- a "New World Religion.

A "conservative" variation on a theme is called "Social Credit."  Many people who believe they are justifiably fighting the Federal Reserve Board are being ushered into advocacy of that system.  It too entails a cashless society with total tracking required.

Think about all of this when you hear common TV ads telling us about the advantages of a coming "Internet of Things" where EVERYTHING is connected!

The mothership of the modern New Age Movement is the Theosophical Movement and the many groups spawned from it including the Anthroposophical Society, Lucis Trust, and many others.  They worked to blend the mysticism of East and West.  It was intrinsically hostile to monotheism in general and Jewish/Christian beliefs in particular.  Indeed, all three monotheistic religions are deemed "peoples of the book."  They must go as the New World Order comes in the mind of New Age adherents.

Indeed, those standing in opposition are "cancerous cells in the global brain."

The New Agers speak often of "harmonic convergences."  Indeed there are many "harmonic convergences between New Agers and important Socialists.  Most of those following the Socialist Movement are familiar with the Fabian Society.  Two very important Fabian names that were clearly prominent early and militant New Agers are Edward Carpenter and Annie Besant.  Both were instrumental in the founding of that organization.

Indeed, there are also those considering themselves "Conservative", "Libertarian" "socialists."  One such site easily findable on the internet is "socialistmystic.blogspot.com."

Early British Socialists who clearly were involved with mysticism, the altered state glue of the New Agers included William Blake (1757-1827); Robert Owen who also formed a socialist utopian community in our neighboring state of Indiana.

One important resource on the subject is a paper you can find in .pdf form on the internet:  "Socialism and Political Atavism" by Libertarian Alliance Robert Thomas.

Then there is the Liberal International which says it is "a world federation of liberal and progressive democratic political parties."  Its founding document, the OXFORD MANIFESTO of 1947 was drafted by prominent European Theosophist and internationalist, Salvador de Madariaga.  Salvador de Madariaga was the grandfather and/or uncle and/or cousin depending on which genealogy one accepts of those put forward by Javier Solana.  He was "grandpa" until Madariaga's Theosophy was emphasized to the public.  Then he suddenly became "great uncle."  He is "great uncle" because Solana's grandfather and Madariaga were "cousins."  That would make him a very distant cousin indeed.  I suspect he was grandpa and it is not convenient for Solana to make the relationship clear.  Solana was on the USA's subversive list for years and then one early December day in 1995 was suddenly made the new head of NATO with powers never granted any other NATO head before since.  I spent several years researching Solana who still plays an extremely prominent role in 'global governance' circles.

Madariaga's drafting of the Oxford Manifesto, the founding document of Liberal International was purportedly inspired by Lord William Henry Beveridge, a prominent Fabian.  How much good there is in the worst of us and how much bad in the best of us -- Lord Beveridge, to his credit did take steps to help Jewish academics escape Hitler's holocaust -- something more than the entire British government can take credit for in those years.  Salvador de Madariaga was the inaugural president of Liberal International in 1948 after drafting the Oxford Manifesto in 1947.  He was close to the Sufi Movement, Krishnamurti and he and his wife Constance Archibald were active Theosophists who raised their daughter Nieves (either Javier Solana's mother or cousin, depending on which genealogy one accepts) in same.  Her favorite guru was Bhagwan Shree Rajneesh.

And, to add to this confusion, of which there is much.  Salvador de Madariaga was also a member of the Mt. Pelerin Society of Ludwig von Mises fame.  If you want to know more about that school of economics, read my friend Harry Veryser's book, IT DIDN'T HAVE TO BE THAT WAY.  [Please note, I'm not calling the Austrian School of Economics 'New Age,' but I am saying that obviously there was Theosophical / New Age penetration of it as about everything else.  Harry Veryser believes the Austrian economic notions could have spared us our present recession lasting from 2008 onwards.]

A global takeover is the New Age Movement aim.  Socialism is their economic system of declared choice.  That is for the 1/3 of the global population surviving should they accomplish their concurrent aims for population reduction.  Barbara Marx Hubbard, one of their primary current leaders, a lady whose name was once placed in nomination for the Vice Presidency at a Democratic Party Convention claimed to have channeled these words printed in her unpublished manuscript and later published book financed by Laurance Rockefeller that the voices said to her, "we come to bring death.  We do this for the sake of the world.  The riders of the pale horse are about to pass among you.  They will separate the wheat (New Agers) from the chaff (the rest of us).  This is the most painful hour in earth's history."

May the Lord grant us all discernment.  And may the Lord help us all!  Education played a huge role in slowing them down for 30 years.  Education may well play the same role now.  A favorite slogan of the New Agers is besides "think globally, act locally," is CRISIS = OPPORTUNITY.  Their declared primary crisis per Barbara Marx Hubbard in her 1988 Seattle Unity speech was "the Environmental Crisis."  First "A New Ice Age" (1970s') then "Global Warming" (late 1980s onwards) and now Climate Change" are flags they are currently flying.  CHANGE, we must have CHANGE, we are all "change agents", facilitating THE NEW SOCIETY, THE NEW AGE, THE NEW CULTURE.

They are sometimes called New Agers, sometimes "Cultural Creatives, sometimes "Progressives".  The name may differ but the game is the same:  New World Order, New World Religion, and some type of a new messiah to lead us in that direction, a direction of a total tracking globalized economy "socialist for the poor," elitism for the rich, for all surviving to join their "new species" of "Homo Noeticus.

There is no benefit, either in the here or the hereafter for signing up for that.
Posted by Constance Cumbey at 2:16 PM 357 comments: 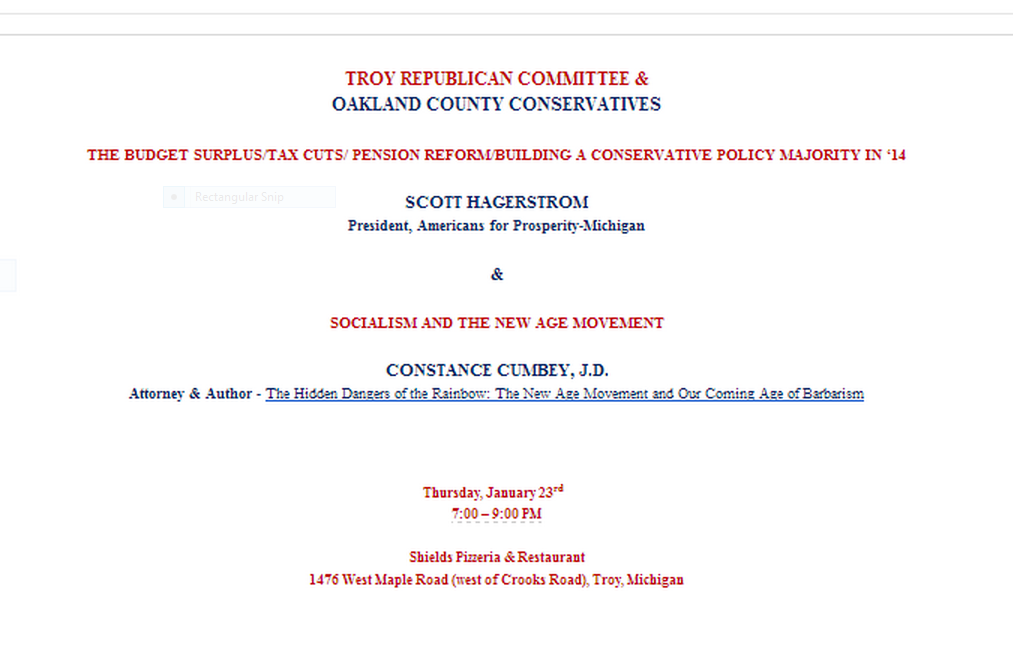 Many of you have asked me if I am speaking anywhere in the near future.  I am scheduled to speak at the above event in Troy, Michigan (an Oakland County, Michigan suburb of Detroit) on January 23rd.  It would be fun to meet and greet those of you who find the event convenient.  There are strong links between the Theosophical Society and the British Fabians.  "Social Credit" was also an occult invention designed to lead to a 'cashless society.'  Barbara Marx Hubbard proclaimed in her Seattle, Washington speech (April 1988) that the higher one went in the Soviet Union, the more likely they were to be involved in the New Age spiritualities.  She claimed the converse was true in the USA -- which may or may not have been true."  She also boasted that 'now all the resonating groups with outwardly different purposes are merging and blending and coming together to do 'the one work.'  The New Age per author Mark Satin (NEW AGE POLITICS) claims to have something for everybody.  I have much material . . . it should be an interesting evening.

The Cuddy chart may be more relevant than ever.  To obtain it, email me at cumbey@gmail.com with the subject line "Cuddy Chart."  I will return it in 11 x 17 " pdf form in both 300 dpi and 600 dpi resolution.

More very soon.  January has been crazy so far!

Well, 2013 has come and gone -- I can't say I'm sorry to see it go.  There was a hint of good news for Catholic opponents of the "Obama Care" aka "Affordable Care Act".  Justice Sonia Sotomayor signed a stay prohibiting enforcing legislation directing religious organizations to provide contraceptive care for their employees.  We now have received further "cheery news" that NSA may have been intercepting shipments of "smart phones" to implant further tracking devices before shipment to the prospective owners.  The news source was allegedly Edward Snowden.

Happy New Year to all!