We must do better -- well said video presentation

I just watched this video.  I am interested in the opinion of my readers on its content.  Personally, I think he makes a great deal of sense.  I fully agree with him on the tuition issue.  What we have done to the younger generation in terms of higher educational costs is nothing short of unconscionable.  This is turn is fodder for the obviously New Age "Occupy" revolution.

Let me know what you think and please, STAY TUNED!

What happens when Occupy Movement takes over a building?

On January 31st, Occupy Miami's tent city was evicted by police action.  According to Miami news sources, this was after four months of protests there.  The occupiers had staked out and used Government Center.  A sympathizer gave them a half-empty apartment building in nearby Overtown, Florida.  What transpired next became sheer hell for the paying residents of the same building. 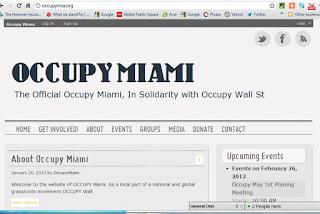 To those of us old enough to remember the "hippie movements" of the late 1960s and 1970s, this had a sense of what the New Agers would probably term "deja vu."  We've seen this before.  Residents complained that drugs were obviously in use.  Doors were ripped off hinges, bathroom sanitation was non-existent.  Anarchist signs were painted on their new "Peace City."

You can read about it and view video reports by clicking here.

Welcome to the "New Age."

Stay tuned!
Constance
Posted by Constance Cumbey at 1:06 AM 38 comments:

THE OCCUPY MOVEMENT'S LATEST: Shut down the corporations??? On my 17th Birthday at that!?

You can watch the video here:

Many thanks to SUSANNA for calling this to our attention.

CONSTANCE
Posted by Constance Cumbey at 7:19 AM 103 comments: