We are WORSE than Sodom & Gomorrah!

The other day, I sat in one of our area Circuit Courts.  To protect the privacy of the players and 'protect the guilty,' I won't say which one.  It may well become big news later.  It was the courtroom of a Judge I respect.  A segmented continuing domestic relations bench trial was in progress.  I noticed that both sides to the litigation had very large files. I thought undoubtedly it had to be because there was a large divorce estate.  That was not the case.

Listening to the public courtroom testimony and the cross-examination and objections, it was clear that what was transpiring was a clear segment of an ongoing war on Christianity and morality.  It was one of the greatest exercises in good becoming "evil" and evil becoming "good" I have personally witnessed.

What was actually going on was a religious war between the "LGBT" community and those electing to flee it.

On the stand, undergoing grueling cross-examination was a repentant ex-lesbian.  She had two children who, from the testimony I heard, were carried in pregnancy by her.  She had received in vitro fertilization from sperm evidently donated by a male activist in the homosexual community.  He evidently was a person of some professional standing who was involved in a very long term same-sex relationship with another man.

The woman on the stand had become a Jehovah's Witness and had totally abandoned her formerly "gay" lifestyle.

She was mercilessly grilled by the man's attorney and the Judge allowed, over objection, sarcastic and argumentative questioning about her suitability to be a parent when she now had a belief system that those practicing homosexuality would not spend eternity with God.

Obviously, the sperm donor male and the ex-partner of the repentant woman had teamed up to try and take custody of the children this woman had carried in her womb from her.

Needless to say, I sat in that courtroom boiling and wondering, "How long, Lord Jesus,how long, how long?!"

I plan to follow this case, which was assigned another segmented trial date.  While I do not approve nor agree with Jehovah Witness theology, for that woman coming from the scene she had, it was definitely a step in the right direction.  She courageously refused to deny her determination to adhere to Scripture in raising her children.  I am praying for her.

I plan to talk about this very sorry scene on my radio program in the morning.  Last week, I asked the network to please rerun the Ervin Baxter program from the week before because he had some critical information that was new to me.  I went to Indiana to help celebrate the new high school graduates in our family and the high honors and scholarships they have received.

I headed this by saying, "we are worse than Sodom & Gomorrah."  Yes we are.  As bad as they were, they had the good sense to choose a judge who disapproved of their lifestyle.  His name was Lot and scripture records that his righteous soul was vexed at what he witnessed in that venue.  These days, we want to disqualify, as Canada is apparently doing, and too many places here, those who even raise an eyebrow at what the Scripture plainly calls "abomination."

May the Lord help us all, especially the young woman struggling in court who turned from that lifestyle. 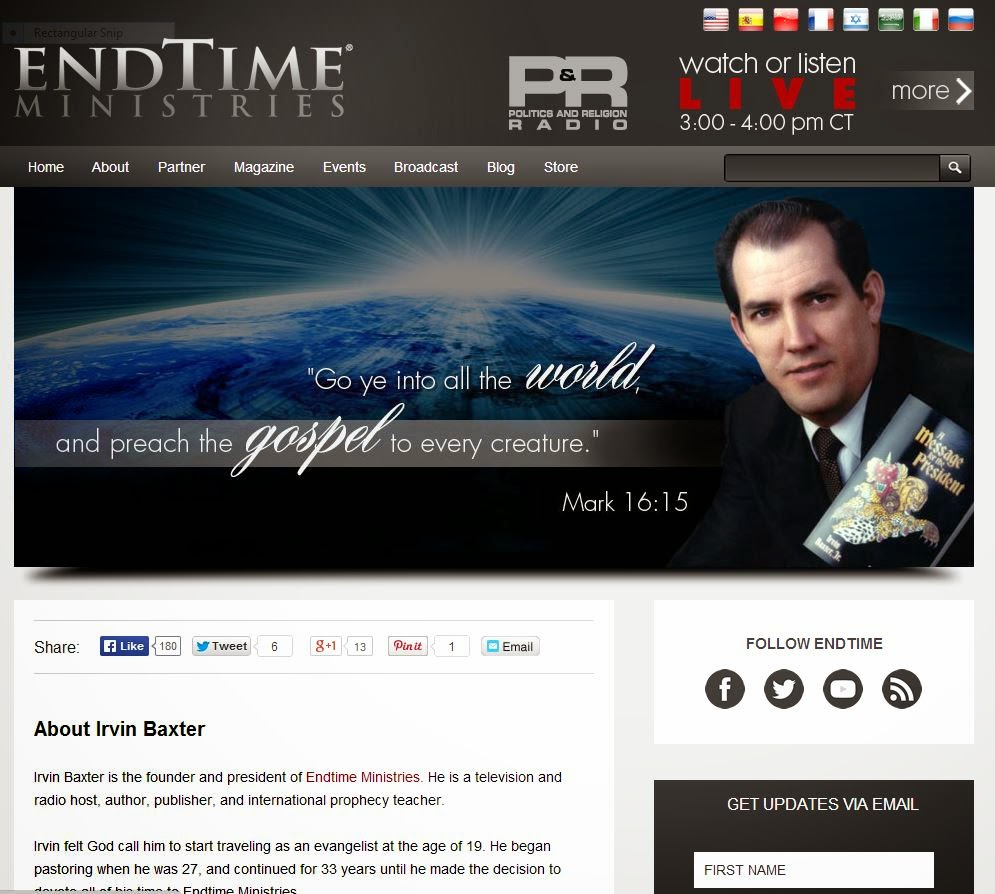 An old friend and fellow dedicated watcher of current events and how they may relate to Biblical prophecy is my radio guest tomorrow.  That is Pastor Irvin Baxter.  While we do not necessarily agree on all areas of Biblical interpretation, we both respect each other as dedicated students and watchers.  I am happy and proud that he is joining us in the morning.  He is just recently back from Israel and has MANY important developments to share with us.  We are live at 7 a.m. Pacific Time (10 a.m. Eastern Standard Time; 9 a.m. Central Time; 8:00 a.m. Mountain Time).  Please join us in the chatroom at TMERadio.com and/or www.themicroeffect.com.  You can call in live with your questions for Pastor Baxter by calling 888-747-1968.