First and foremost, I am asking for prayers for Constance.  She continues to run a low grade fever which is well into its second week.  She believes this to be a reaction after receiving a Covid booster.  I know right now she is feeling pretty lousy.  Your thoughts and prayers are appreciated.

The Shaping of a New Economic Order

I had planned to write more in-depth about the following articles.  Unfortunately time does not permit so I’ll let the articles speak for themselves.

Recently I noticed an article about microchip implants for use for contactless payments. Considering the  geopolitical realignment currently underway as well as the competition for who will redefine the existing economic rules-based order, Windows Central’s statement comes more into focus:  “who will govern this evolving global community and economy becomes relevant. Especially since nonparticipants in this system would be unable to buy or sell goods or services.”

A digital Bretton Woods or something different?  Whichever way it goes I expect this contactless payment system will integrate with a Social Value Rewards System. 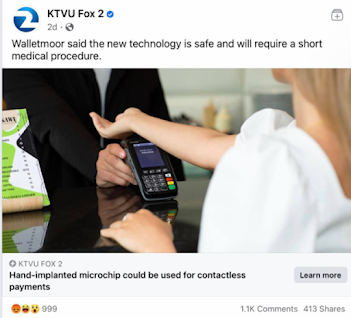 Former EU diplomat Alastair Crooke writes that the West’s expulsion of Russia from the SWIFT payment system was “an act of self-mutilation.” 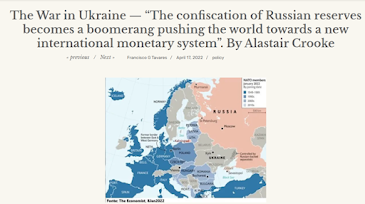 "The current military operation in Ukraine will, in due course, be relegated to the status of little more than a footnote in global history, although the all-out financial war that has erupted in Russia will be instrumental in shaping the coming new world order."

"US hegemony over the so-called “rules-based order” has been much more financial (rather than military). That is, an order imposed by the US threat to 'sanction' any and all offenders with a 'neutron bomb' of US Treasury bills...And on February 26, this system began to die..."

"...They act only on impulse. We know this because both the Fed and the ECB reported that they were not consulted about the confiscation of gold or the expulsion of seven Russian banks from the SWIFT financial clearing system. And they clarified that, if consulted, they would have opposed both movements."

The International Institute for Middle East and Balkan Studies writes the Ukraine war is a prelude to the emergence of a new international order.

“It is important to emphasize that this is not a traditional war, nor a conflict between two states over disputed territory, nor a pre-election propaganda, but a war of an entirely different kind. This war is a first step on the path to establishment of a new order in international relations, that is a new division of spheres of influence at the global level.”

“The developments in Ukraine represent the beginning of the end of the existing world order…Put succinctly, the current developments are a prelude to the emergence of a new international order.”

The EU is flexing its muscle to dissuade China from siding with Russia. Meanwhile Russia and China profess to speak with “one voice.” 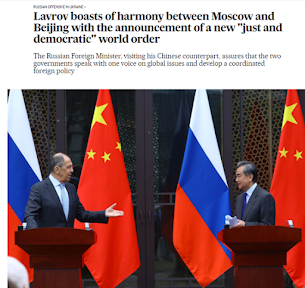 All of this is consistent with new age expectations that the forces of the old age would clash and from it would rise the new. But we know that’s not how things pan out.

Deception is at an all time high - Ukraine, Qanon, Trump cult

Donald Trump spoke in Michigan a week ago.  I viewed the livestream presentation last Sunday afternoon.  It was hard to stomach.  He spoke again last night in Selma, North Carolina and his groupies such as Mike Lindell, the woman running for governor of Arizona on a Trump ticket were present.  At the Michigan event in Washington, Michigan on March 2nd, he announced his "RINO" (translated:  anybody who raises an eyebrow at Donald Trump) hitlist.  Two Michigan Congressmen Peter Meijer and Fred Upton were included.  The next day Upon announced his retirement and Trump has been  boasting about his success in chasing them from the political scene.  Brave Liz Cheney is on his list.  He already chased Adam Kinzinger away, but don't count Kinzinger out.  He has formed a brave Country First PAC (Political Action Committee.

I've written before about the LOVE JOY TRUMP book that clearly includes unashamedly blatant New Age themes and proclamations such as Trump is ushering in the Age of Aquarius, the Millennial Reign of Christ, and Gaia worship.  This should be shocking to anybody knowing specifics about the New Age Movement and their Bible.  I'm bothered by how little it is disturbing Evangelicals and some Catholics who once professed to know better.

I believe Trump is consciously operating out of the old Nazi/Hitler   playbook.  He has declared that if he is re=elected President in 2024 he will pardon those charged and convicted with the Capitol invasion on January 6, 2021.  He is running efforts to take control of the election machinery from the bottom up - precinct workers, clerks, public officials, judges and putting those in power who will reaffirm his big lie that he was elected by a landslide in 2020 but the "Bit Steal" intervened.  He is holding frequent large scale rallies that in some ways remind me of Munich spectacles.

Brannon Howse has made probably an excellent living parroting the information I pioneered on the New Age Movement and its ramifications for Christians.  For that, I have no complaint, although I think it strange that he never attempted to make contact with me.  As those of you who hav e, you know that I  pick up my phone and am willing to generously share information and sources.

Qanon is obviously alive and well on Planet Earth.  A Trump enrosed Secretary of State candidate for michigan Kristine Karamo spoke to a recent Michigan Republic Club  meeting on the second Wednesday of March, 2022.  I was present, seated near the font and given the mike to question her.  I expressed my fears and concerns to her about Qanon and itss possible spread to the Michigan Trump circles.  She told the entire room she knew little or nothing about Qanon.  I wa shocked even before I learned the full truth because she claims to have a master's degree in Apologetics.  It is impossible in my opinion to be in that field and not be aware of Qanon.

Yesterday, another candidate for the same office, a Michigan State Representative from the Upper Peninsula introduced himself to me at a small political meeting.  I was there to help notarize precinct delegate applications.  I decided to tell h im my concerns about Ms. Karamo's statements to me and the large audience of which I was a part this past week  -- our local GoGop meeting.  He was shocked at her reported lack of knowledge.  "Kristine Karamo spoke at a national Qanon Convention in Las Vegas, Nevada on October 23, 2021 and he promptly handed me the evidence.   You can find it yourself easily on a Google / Duck Dck Go /  Bing or other internet engine search.

It is also looking to me sadly as though Archbishop Vigano is also falling into the Qanon and beyond traps including the theory that Putin is a hero trying to block the World Economic Forum and New World Order.

So much confusion -- hard to know where to start to fight it.  I am also fearful that some of you might be taken in by the Qanon cult.  We must be praying daily, "lead us not into temptation, but deliver us from evil."