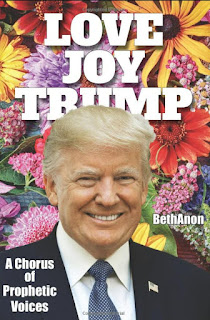 Most of us here can hopefully fully understand the implications to us of the great COVID global reset that is obviously been in the works. I warned everybody here about it more than a year ago and said "Mark my words, a RESET is coming." Most of that was ignored as too many went off discussing everything else, relevant or irrelevant.

I'm far more concerned for those here on what's deceiving US! As bad as Pope Francis has been I've never heard him deny Jesus and promote GAIA worship, at least directly -- although the agenda he's promoting does go too largely that direction. But LOVE JOY TRUMP has in many critical spots promotion of other gods, including the Earth and the Universe as entities deserving worship.

NOW FOR THE COMMENTER WHO CRITICIZED ME FOR THE ARTICLES ON JOHN E. FETZER AND THE FETZER INSTITUTE, you were obviously not curious enough to check out is current status as one of the best-funded and most powerful NEW AGE organizations intentionally pushing the entire Benjamin Creme, New World Order, New World Religion, Cashless Society, promotion of the Great Invocation as the world prayer, cleansing action for dissidents, etc., ad nauseum, for yourself/yourselves (if you represent more than one).

The Fetzer Institute is powerful and heavily financially endowed and aggressively pushing everything I have fought since 1981 -- 40 years ago. I believe that John E. Fetzer may well have been the force that prevented early disclosure of Nazi occult activity. He was promoting the I AM Movement before World War II. That was the Theosophical branch of the New Age occult movement that spawned the Silver Shirts pro-Nazi organization that sent William Dudley Pelley to prison for treasonous activities. Roosevelt put Fetzer in charge of media censorship for World War II. Fetzer was one of the first persons to enter Joseph Goebbels office in Berlin after the allies advanced there.

There is documentation on the very large website that they now believe they are going to succeed entirely in their original agenda whereas in May 1982 they failed. This, they say, is because now a majority of people are SBNR -- Spiritual but not Religious.

Fetzer sold the Tigers and liquidated his TV/Radio empire because of his extreme disappointment and depression over the non-appearance of Maitreya on May 20, 1982. I suspect on many grounds that I may have been an intervening variable. Benjamin Creme's disappointing to Fetzer press conference on May 20, 2015 was precisely five days after Benjamin and I had our WRIF debate that listened to by thousands in the Detroit area. The Detroit Free Press ran a major article on the work I was doing to fight things 10 days before that interview which is why the rock & roll station sought me out for their one hour of public service time on Sunday evenings. The first weekend after that article, I was supposed to have debated Benjamin Creme, but the trans-Atlantic line went down and they were unable to connect with Creme. I had the entire hour to myself to explain exactly what was happening. The station had over 500 requests for tapes of that interview. The tapes were not given, but the next weekend, the debate did occur and Creme was admittedly devastated. He said on many interviews in many places, including the Allen Dale Show in San Antonio, Texas that I would "pay dearly" for my interference with the Christ's Reappearance." This was and is the same "Reappearance" of their New Age "Christ" which LOVE JOY TRUMP is not so subtly promoting in substantial portions of that book.

I am much more worried on this blogspot about what is infecting us. Most of you have no problems with the Pope Francis praising of Agenda 21, Agenda 30, etc. Most of us see through the LGBTQ agenda and the Biden/Kamala Harris roles in continuing to promote it. We see the evils of the very non-biblical transgenderism. But too many of you fail to see where the infiltration comes in what we supposed to be our camp -- the tares planted among the wheat.

You are yawning at LOVE JOY TRUMP (many of you), failing to recognize the Trump condoning of it etc. At any rate, as Moses complained to God about the Israelites angry at him, "you know, I have not taken so much as an ass from them."I think I can safely say the same. I have not gone out like so many like Texe Marrs, and others making making literally millions from you selling you tapes, videos, overly sensational books about Illuminati." At the same time, he was openly advocating blatant anti-Semitism. Tal Brooke has done some of the same.

So many have successfully played the "watch the fundamentalists run" game and too many of you have ran with them.

My thoughts this morning.