Some of you blogspot readers and participants have thought the activities of the richly endowed, financed and highly networked activities of the Fetzer Foundation are now irrelevant.  That is hardly the case.  Those who received the disinformation of some Evangelical circles such as Walter Martin and Tal Brooke believe that few of importance had real plans during the 1980s and have them for now to take out the Christian world.  Again, clearly not true.  There is now a highly public campaign of which the Fetzer Institute is now a major player to make the very ugliest plans of "The Christ is Now Here" proponents of the 1980s happen now.  They are so very confident that they will now succeed whereas in May 1982 they had a major disappointment because now, "a majority of people are SBNR -- 'spiritual but not religious.'"

The Fetzer Institute and its components, including the John B. Fetzer Memorial Trust Fund, have freely published and are extolling as good and necessary just about everything of which I warned starting in 1981, Benjamin Creme and all.  For example, here is one they now have on their "Spiritual Library" in the form of an interview by Fetzer Institute Executive, Bruce Fetzer, a former Baptist Christian from Raleigh, North Carolina, who is the nephew of founder John Earl Fetzer (1901-1991).  For the record, John Earl Fetzer, a former Seventh Day Adventist, was the person in charge of censorship for World War II and post events surrounding Nazism -- probably the one who kept news of Hitler's occultism so long bottled up; the enormously wealthy owner of many radio, tv, and cable stations.  He left his entire huge fortune and the income it would engender from investments to making his dream of the New Age, complete with a new world financial system, a new world religion, and a new "Christ" who admittedly was not Jesus to happen as quickly as possible.

Even this past Sunday, the CBS 60 Minute program had a segment on one of these "feel good" everybody love everybody across political lines.  It had a look and a feel to it, encouraging "facilitation," and I promptly googled it along with "Fetzer Institute" and bingo -- it was a Fetzer Institute funded program.  It is in the workshops, the 'facilitation,' the 'meditations', where people go into their altered states that cause the New Age desired 'paradigm shifts' that cause the shifts in world view that they hope will lead to the acceptance of a "new gospel" that very clearly isn't.   What is really being done with 'facilitation' is "initiation" -- hoped for initiation into their 'occult mysteries' that could well cost participants their very souls, as it most likely cost John Earl Fetzer his own soul.

Here is what I just found in the Fetzer archives this morning (copyrighted 2018 material) vis a vis even the extremes of Benjamin Creme and 'The Reappearance of the Christ" in statements by Bruce Fetzer himself:

The other thing I think needs to be elaborated on is that, in the history, at least in the archives as well as in some of the oral histories, there’s a fair amount of discounting of the 80’s and that John was trying to build in terms of creating a direct relationship between the upper and the lower. By that I mean the hierarchy and the physical, the inner life and the outer life. Here is a book, I brought a couple of selections here. Not all of the library that John gave me to read, but this is one of the books from Benjamin Creme called The Reappearance of the Christ and the Masters of Wisdom. It’s an interesting book because it’s one that John read as well. What it does is describe the relationship between the Masters and the hierarchy and the Christ Consciousness, and its application in the physical realm. The manifestation in this physical presence. It’s important as an independent reference, because the channelings with Jim Gordon talk very directly about the White Brotherhood, which is a council of Masters working with the Institute in the early days. John very much believed that there was a higher order to the universe that was giving direction to him to inspire the Institute, to carry on this inspiration in dynamic ways in the future, without creating a religion, by the way.'' 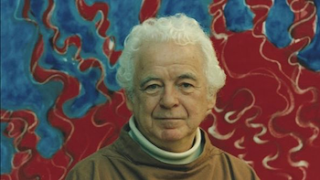 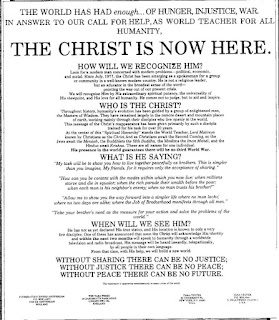 This interview was not ancient history.  It was recorded by Bruce  Fetzer on July 6, 2011 and considered signficant enough to the Institute's aggressive work to be there now.

Reading and listening (a handy feature of Microsoft's EDGE Browser to read documents out loud) to other Fetzer library on live archived and searchable interviews,  I learn that on March 10, 1982 John Earl Fetzer was eagerly awaiting the 'cleansing action' where many of us would 'disappear' or be sent to 'another dimension'.  On April 25, 1982, his channeler, Jim Gordon, sent Fetzer a letter of congratulations -- the very day the world wide ads ran saying 'the Christ is now here.'  May 20, 1982 was their day of great disappointment, but still their work to implement this anti-God vision continues with force as they strive to honor John Earl Fetzer's vision.  I have learned that Michigan judges have been placed in Fetzer funded 'facilitation operations' and I'm sure it is a very small step towards forcing all us Michigan lawyers into same as part of "Continuing Legal Education."

So much is happening on so many fronts, but the Fetzer operation is a very important front.