The Spread of Occupy Wall Street

Merry Christmas to all.  If the 12-21-2012 New Age / Occupy Wall Street contingent gets its way, including those calling for our respective "Karmageddons" (Shirley Maclaine, et al), future celebrations may become problematic.  In the meantime, enjoy the season with your families and remember that Jesus is the reason for the season!

Here is a copy of the abstract of the academic paper shown on the Occupy Wall Street Movement spread -- at least its Facebook aspects.  It would be interesting to see an update.  There are 3,180,000 google hits on the "Occupy Movement" as of the time of this blogspot posting:

Abstract:
Since Occupy Wall Street began in New York City on September 17th, the movement has spread offline to hundreds of locations around the globe. Social networking sites have been critical for linking potential supporters and distributing information. In addition to Facebook pages on the Wall Street Occupation, more than 400 unique pages have been established in order to spread the movement across the US, including at least one page in each of the 50 states. These Facebook pages facilitate the creation of local encampments and the organization of protests and marches to oppose the existing economic and political system. '

Based on data acquired from Facebook, we find that Occupy groups have recruited over 170,000 active Facebook users and more than 1.4 million “likes” in support of Occupations. By October 22, Facebook pages related to the Wall Street Occupation had accumulated more than 390,000 “likes”, while almost twice that number, more than 770,000, have been expressed for the 324 local sites. Most new Occupation pages were started between September 23th and October 5th. On October 11th, occupy activity on Facebook peaked with 73,812 posts and comments to an occupy page in a day. By October 22nd, there had been 1,170,626 total posts or comments associated with Occupation pages. The density of Facebook activism is highest in college towns and in state capitals. Major uses for Facebook within the movement include the recruitment of people and resources to local occupations; information sharing and story telling; and across-group exchanges. While the focus of Occupy Wall Street is on mobilizing individual’s offline, online activities greatly facilitate these efforts.
Number of Pages in PDF File: 20
Keywords: Occupy Wall Street, Social Networks, Social Movements
Working Paper Series

Also, we have New Zealand participants.  Their lovely country has suffered a new round of Christchurch earthquakes.  Our condolences and prayers for you.

CONSTANCE
Posted by Constance Cumbey at 12:20 AM 79 comments:

I had inquiries in our forum ("comments") section about how whether I thought the recent Moscow mass demonstrations were connected in any way with the Occupy Movement (including but not limited to Occupy Wall Street).  My answer was "yes."  It is my firm belief that the Occupy Movement is tied to New Age expectations for their "Ascension" date of 12-21-2012 and our supposed "Karmageddon" (Shirley Maclaine et al).  Here is one New Ager "Occupy" perspective on it.  There are many others: 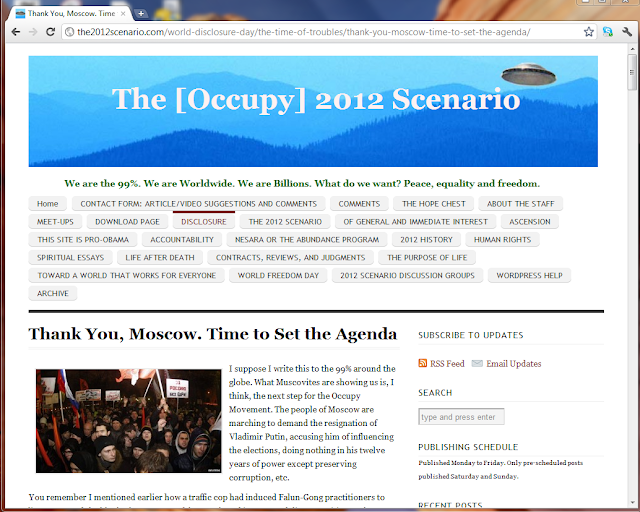 As you can see, this site is typical of the "witches' brew" that is the Occupy Movement:  Mayan calendar expectations tied in with spiritualism and political changes (i.e. chaos) sought by those hoping this will help usher in their "New Age."  You may explore the whole ugly site by clicking here:

UPDATE:  One of our forum (comment section) participants disputes that the current demonstrations inRussia have any connection to the "Occupy Movement" in particular and New Age Movement in general.  Since a picture is generally considered worth a thousand words, here's one of the Facebook page of "Occupy Russia."  There is another page for "Occupy Moscow":

Constance
Posted by Constance Cumbey at 12:18 AM 142 comments: 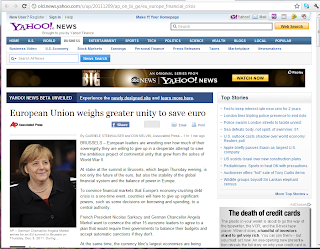 This item is a little over an hour old on the internet as I post here:

BRUSSELS – European leaders are wrestling over how much of their sovereignty they are willing to give up in a desperate attempt to save the ambitious project of continental unity that grew from the ashes of World War II.
At stake at the summit in Brussels, which began Thursday evening, is not only the future of the euro, but also the stability of the global financial system and the balance of power in Europe.
To convince financial markets that Europe's economy-crushing debt crisis is a one-time event, countries will have to give up significant powers, such as some decisions on borrowing and spending, to a central authority.
French President Nicolas Sarkozy and German Chancellor Angela Merkel want to convince the other 15 eurozone leaders to agree to a plan that would require their governments to balance their budgets and accept automatic sanctions if they don't.
At the same time, the currency bloc's largest economies are being pushed to commit more money to boost the eurozone's firewalls as the crisis threatens to pull down Italy and Spain.
The overall plan must be good enough to convince the European Central Bank to intervene in the government bond markets in a manner large enough to stop the panic there, said Paul De Grauwe, an economics professor and EU expert at the Catholic University of Leuven, in Belgium.

Read the rest of the article by clicking here.  Can't help but wonder where Javier Solana is and what he is thinking tonight!  Well, his Twitter account gives a few clues.  Here's an article he posted there. 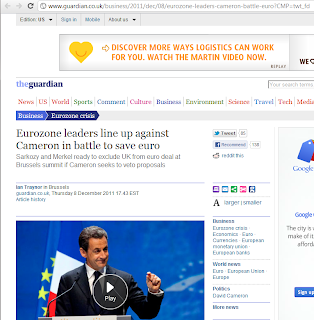 Looks like what they (Javier and others) are thinking is that Great Britain is in for BIG TROUBLE if they don't play ball!  You may read that full article by clicking here.    I can't help but remember the old Daniel prophecy:


— And whereas thou sawest iron mixed with miry clay, they shall mingle themselves with the seed of men: but they shall not cleave one to another, even as iron is not mixed with clay. Daniel 2:4.

Well, it will be interesting to watch this disturbing scenario play out.  There will be winners and losers in that political - economic game.

By the way, as I write this, I'm listening to Michael Savage.  He has a guest on as we speak talking about the "Occupy Movement" being the latest manifestation of "think globally, act locally."  That is a prime NEW AGE SLOGAN and has been as long as I've been watching.  I reiterate:  The Occupy Movement is the NEW AGE OCCUPY MOVEMENT IN FULL FORCE.  Savage's guest says it is MARXISM.  I say it is NEW AGE!