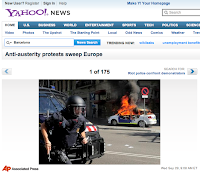 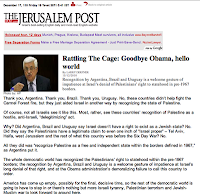 This is another one to read with Bibles open.  This is a column in the Jerusalem Post which is pro- division, anti Benjamin Netanyahu.  Quoting more from that article, we read the writer's conclusions:

None of these moves raises any objection at all to Israel being a Jewish state, or to Israeli sovereignty within its pre-Six Day War borders. Nobody gets hurt, either. All that these measures attempt to do is bring Israel to its senses.

So thank you, Javier Solana, Felipe Gonzales and Richard von Weizsacker – and Helmut Schmidt, Lionel Jospin, Romano Prodi and the rest who signed this letter. Thank you, again, Argentina, Brazil and Uruguay – and the other democratic countries that, I’m sure, will be recognizing Palestine before too long.

A terrible fire has been burning this land for 43 years. If it’s ever put out, if this country ever starts to recover, the foreign countries and leaders who stood against the spreading blaze will be remembered here as true friends.

I find it interesting, for one, that Javier Solana's name was the first one on the "thank you" list.  Incredible pressures on that little country named Israel:  internal and external.

This sounds like shades of Peter LeMesurier's THE ARMAGEDDON SCRIPT.  Read the entire article by clicking here or here:

CONSTANCE
Posted by Constance Cumbey at 1:00 AM

"EU wary of handling explosive Kosovo report
16.12.2010 @ 09:26 CET
The EU has painfully avoided taking a clear-cut position on a report by the Council of Europe which says Kosovo Prime Minister Hashim Thaci was the head of a gruesome crime ring and that EU countries knew but said nothing about it.

Preview of the image of the beast?

Very disturbing imagery. It could very well be a strong prelude to "image of the beast."

This information is very useful. thank you for sharing. and I will also share information about health through the website

GOOD DAY AND WELCOME TO STANDARD ONLINE FINANCE LTD
Do you need 100% Finance? I can fix your financial needs with a lower back problem of 3% interest rate. Whatever your circumstances, self employed, retired, have a poor credit rating, we could help. flexible repayment, Contact us at: standardonlineinvestment@gmail.com

Apply now for all types of loans and get money urgently!
* The interest rate is 3%
* Choose between 1 and 30 years of repayment.
* Choose between monthly and annual repayment plan.
* Terms and conditions of the flexibility of loans.