Let's please continue to keep Constance in our prayers.  She has had a very bumpy week as she was admitted into the hospital in serious condition.  Today when I talked with her she sounded like she had gained some energy and a bit more like herself.   When she returns home I'll ask her to provide details of what she would like to share.

After reading some of the blog comments ridiculing the research time spent on Javier Solana, I felt compelled to respond.

Javier Solana’s tenure as Secretary General of the Western European Union (WEU) is one which garnered the attention of several global governance researchers (myself included). In her book The Western European Union, Sally Rohan opens with the question what was the role of this short lived institution? The answer is this ten-nation military alliance served to develop the European Union’s military architecture which was purposefully kept at a polite distance from the integration process. The Council of Europe was tasked with the integration process.

An aspect of the WEU framework which was adopted by the Council of Ministers is the transfer of power mechanism – Recommendation 666 – whereby emergency powers are given to the High Representative in the event of a crisis. The position of High Representative, created under Section 666 of the Europa code, was to be filled by an individual having a strong political profile and backed by credible operational capabilities so that a cohesive EU strategy would be applied foremost to Russia, and secondarily the Ukraine and Mediterranean regions.

All of the above is ample rationale for the continued observation of both the position of High Representative as well as the chief architect of the EU’s military apparatus.

The current appointee to the High Representative position is Josep Borrell.

It has been reported that Josep Borrell regularly consults with Solana on matters of foreign policy. Whether or not this is the case, their messages appear to be  harmonized. Before Russia’s invasion of Ukraine both men had voiced the solution needed to be derived from European diplomacy. This did not happen as the United States sidelined EU diplomacy citing its weak foreign policy. Both Solana and Borrell since have advocated for China to become the conflict’s mediator. Solana has long called for China to assume a leading role in global governance. 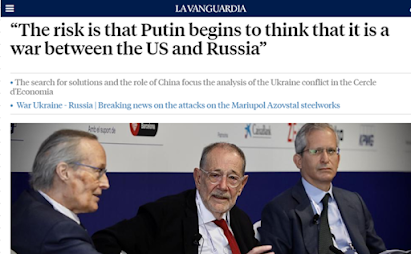 What’s disturbing is China’s assessment and proposed solution to the current crisis:  it is the US-led NATO which is problematic and that Europe needs to complete its security architecture by achieving strategic autonomy.  China calls for Europe sideline the United States and incorporate Russia into European security architecture which is what French President Macron had envisioned would be a counter-balance to US hegemony.

Both Borrell and Solana are working to achieve European strategic autonomy. While Solana says he does not envision Europe separating from the NATO security arrangements, he has articulated a vision of European control of NATO assets. 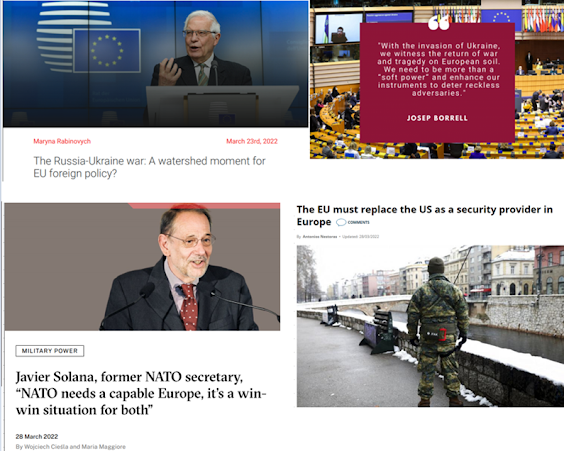 Solana’s work in formulating EU foreign and militarization policies has not diminished with his return to the private sector. He remains one of the movers and shakers of the EU’s Permanent Structured Cooperation (PESCO) programme. Solana’s defense policy paper mentions the EU Parliament’s authority over the military architecture. There is none. The Parliament’s voice is consultative only. The paper paves ways coalitions of member states who wish to engage in military action would be able to work around the unanimity rule, i.e., through the instrument provided in the Lisbon Treaty called Enhanced Cooperation.

The Enhanced Cooperation instrument was explored several years back with the proposal that Core Defense Groups be formed so that military action would not be subject to objecting states’ vetoes. The 1999 Amsterdam Council had expressed concerns that Enhanced Cooperation could be used as a means to circumvent the Council of Ministers and warned that it should never be used in defense policy as that would be dangerous.

Solana presently chairs an initiative called ENGAGE – Envisioning a New Governance Architecture for a Global Europe – which is a consortium of legal experts brought together to explore the EU treaties and to form a legal basis to overcome the “bipolarity” of EU external actions.  In other words, while they pay lip service to unanimity, the intent is to find avenues to circumvent it.

On March 22, Solana addressed the conference hosted by the European Parliament Office in Barcelona entitled “2022 The Year of European Defense” where he called for the further development of the EU’s military capabilities. Soon thereafter, some Members of European Parliament (MEPs) warned of the dangers associated with the EU’s current militarization trajectory. MEP Ozlem Demirel said “the speed with which all this has now happened clearly shows that nothing has been thought up and decided upon on an ad hoc basis. We are talking about arming programmes that have been ready to go for a long time and which the EU is now taking advantage of the situation for.”

MEP Hannah Neumann’s assessment  that the EU Parliament is shut out of defense decisions reflects an understanding of the Parliament’s powerlessness over military matters.

Notwithstanding Solana’s calls for China to assume more of a leading role in global governance, some of his statements on the Ukraine conflict sound perfectly rational:  that the West is now experiencing the consequences for the false promise of Ukraine’s entry into NATO; that the world cannot afford a third world war with nuclear weapons; and that the Ukraine conflict can end only with a diplomatic agreement. 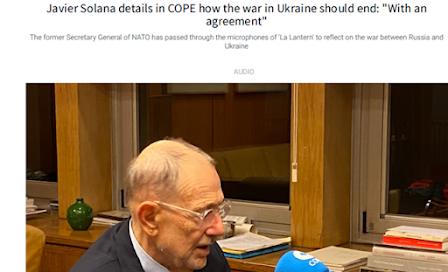 Solana acknowledges that at the present time he is not in a position to negotiate the diplomatic solution. Perhaps he is to remain in the private sector and only effect change without the backing of credible capabilities.  Nevertheless, the current High Representative position carries the weight of the architecture Solana designed should the Council or a Core Defense Group activate one particular instrument from their toolkit.

Before the Russian invasion, one article I found of interest is this piece published by the Kyiv Post: 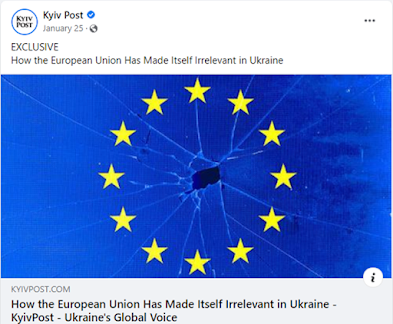 Here the writer expresses the opinion that the EU hasn’t employed diplomats since Barroso and Solana  who are competent enough to handle Ukraine policy.  He then calls  for “a strong and serious commissioner…to be given overall responsibility for Ukraine, as Solana and Füle had.”  The writer’s perception is that Josep Borrell lacks the strength to stand up to Russia.

There are voices within the European Union who have said the EU would lead the system of global governance. In its Global Governance 2025 report, the US Office of the Director of National Intelligence  in conjunction with the EU Institute of Security Studies lays out the case that its best hope for global governance is a European launch.

Solana’s past role in global governance has been far from insignificant. Whatever his future role turns out to be, I expect it not to be minuscule.