Today as I watch, a Memorial Service is being held for Senator John McCain at the North Phoenix Baptist Church in Arizona.  I have seen Senator McCain speak on various occasions, but on one notable occasion in July 1983 I met him personally.

The occasion was the International Christian Book Sellers Convention in Washington, D.C., July 12-14, 1983).  I was sitting at a large conference table in a press room where I was being interviewed.  Sitting at the same table was a man who graciously introduced himself to me as a Congressman.  He was a new member of the United States House of Representatives from the State of Arizona.  He introduced himself to me and said he was familiar with my work.  I believe that may have been because in early Spring 1983, I spoke for a week in his district.  I was brought to Phoenix, Arizona by the Arizona Breakfast Club run by local activist Harry Everingham.  I spoke many places that week in the Phoenix and Scottsdale area.  The stint included in several large area churches.  I still treasure the trophy the Arizona Breakfast Club presented me at their Saturday morning meeting.  My Uncle Melvin Butler who lived in Phoenix came to hear me and it was good to see a family member who lived so far away from Fort Wayne, Indiana where I grew up and Michigan my permanent adult residence.

As I recall the conversation, when whoever finished questioning me was finished, Representative McCain spoke up and as I can best recall said, "Mrs. Cumbey, my name is Representative John McCain . . .  More was said but I can't presently recall what was said.  I told him I was happy to meet him, which I, of course, was.

My memory of that encounter with then U.S. Representative John McCain is brief but memorable.  I suspect his interest grew from the Arizona Breakfast Club which clearly was an important part of his base, but I remember him as a pleasant and memorable encounter.

From my personal perspective, he will be missed.  This is not to end the discussion on my last post, which I want to continue, but I thought this was an important memory to share.  It has certainly been on my mind during this past week.

I'm reprinting this public document verbatim as I retrieved it from Scribd tonight.  I invite Susanna's comments.

Kofi Annan the former Secretary General of the United Nations is dead at age 80.  He was the first Black Secretary-General of the UN and held that post between January 1997 through December 2006.  He also was the President of "the Elders" an important organization in "global governance" promotion circles.  I personally met him and talked with him for about 20 to 30 minutes in late December 1983 at the CAUSA International event that group had made the mistake of inviting me to attend at their expense.  He told me that night that he had Theosophical friends in London, England.  CAUSA was one of the major political action arms of Unification Church and was an important bridge between them and Christian compromisers.  I was speedily isolated and transported home once they discovered whom they had placed on their premises.  This was during the time that HIDDEN DANGERS OF THE RAINBOW headed the Christian best-seller list.  The Conference that they had persistently invited me to attend at their expense was billed as a "positive alternative to Marxism."  He had held other high level UN posts prior to his election as UN Secretary General in 1997.

Kofi Annan was also close to New Age financier and leader, Ted Turner as well as to Javier Solana.  Kofi Annan's autobiographical work Interventions (Penguin Press, New York 2012) gave evidence that Javier Solana had critical life and death decisions for Yugoslavia (now FRY - "former Republic of Yugoslavia) handed him in January 1999.  Annan flew to Brussels to meet with other world leaders on that decision.   They had worked closely before and would work extensively thereafter as documented in Kofi Annan's book. 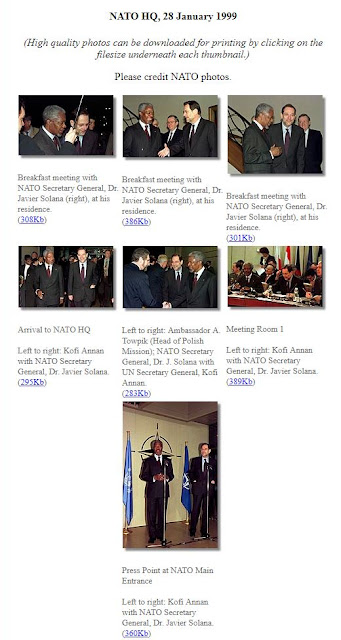 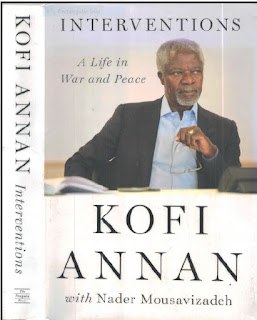 "Throughout the crisis, I had maintained a very close relationship with Javier Solana, the cerebral and shrewd Spanish NATO secretary general who combined a deep aversion to war with his own determination, as a proud European, not to allow Milosevic to make a mockery of the continent's commitment to peace and human rights once again. In a call on March 17, we spoke of how no one seemed to be getting through to Milosevic-not his Russian allies nor Holbrooke, with whom he had negotiated an end to the war in Bosnia.

"It was clear that the moment of truth had arrived when the OSCE observers were ordered to leave Kosovo. On the evening of March 23, Solana called me again to say that Holbrooke would be returning from Belgrade to the NATO headquarters in Brussels with "very bad news." He told me that he would be transferring the authority to launch a military operation to the Supreme Allied Commander Europe imminently, meaning that military action by NATO would soon begin. With Russian opposition to any resolution mandating the use of force, this meant NATO would be breaking with the will of the Security Council. (Page 93)

Kofi Annan, a Ghana native, was a very powerful player on globalization ("New World Order") during his long UN career that started in 1962.  He is gone now.  Javier Solana continues on in his "retirement" that appears to me to be anything but "retiring."  It will now be interesting to me to see how "the Elders" will rearrange themselves after Kofi Annan.