What's been happening? Everything! I helped cause Brexit, "demonized Alice Bailey"?

Vision has been a serious issue with me lately.  For the duration I have given up all night driving.  Reading and even TV viewing were serious.  I had issues both with wet macular degeneration for which I have been receiving shots in the eyes for the past two years.  My retinal specialist approved cataract surgeries for which I had two in the past month, the last a week ago this morning.  That has slowed my writings and commentaries.  The cataract surgeries have helped and now one eye is fixed up with a contact implant for distance and the other for reading.  I'm seeing better right now than I have in a long time, but I'm still "not out of the woods" on the macular degeneration.  Pray for my eyes.  As God told Moses, "who made the mouth, I will be with thy mouth."  Moses still was not adequately reassured, so God told him, "very well, take Aaron as your spokesman."

Well, God made the eyes.  I'm praying he will stay with mine.

There have been so many critical developments on so many fronts, it is difficult to keep up.  My dear friend, Marie Fisher, of Spokane, Washington, has been watching developments on the Amazon Synod of the Vatican and informing me on same.  Rich Peterson (our "Rich of Medford") has also been keeping me informed.  The developments have been nothing short of revolting.  Most offensive was the Pachamama controversy.  Pachamama is the South American name for "Gaia."  It is a form of both idol and Earth worship -- a false god/goddess.

Courageous Catholics have been speaking out against it including but not limited to EWTN;a Raymond Arroyo, Archbishop Schneider,  and numerous others.  But, Pope Francis, has apologized for a courageous Catholic who threw the Pachamama statute in to the Tiber River and caused the placing of Pachamama relics on the Vatican's altar.

Now, on a personal front, I made interesting discoveries vis a vis my own work over the past 38 years since 1981 -- I, Constance Cumbey,  am allegedly partially responsible for Brexit??!!  That article, "Plutarchy in the UK" also made an audaciously incorrect statement that I, in Hidden Dangers of the Rainbow, coined the phrase "Prison Planet."  Well, I may wish I had, but I did not.  To the best of my present knowledge, that term was coined by Alex Jones, to whom I have had no communication. 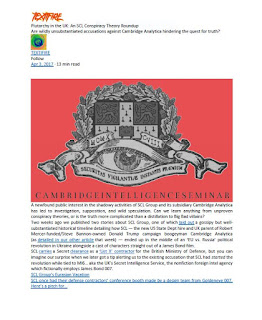 Next, I learned I was the villain of a historical novel on the life of Alice Ann Bailey.  The book was written by an Australian occultist, a former teacher, who brags that she has earned a Ph.D. on the life of Alice Ann Bailey.  I alleged demonized poor Alice Bailey by making claims that she was possessed by the spirit of the Antichrist.  Author Isobel Blackthorn obviously believes that Alice Bailey's "Christ" who is clearly not Jesus, is the real Christ and Jesus was not.  That is the biblical definition of "Antichrist" (1 John 2:22), but Isobel Blackthorn says I should be discounted because I am seeing through an "evangelical perspective."  I submit that Alice Bailey, in making a decision to link with Theosophists and their magazine Lucifer, in founding her own publishing enterprise as "Lucifer Publishing Company," and in energetically writing about "The Reappearance of the Christ" (her 1947 book) did an excellent job without my help of demonizing herself. 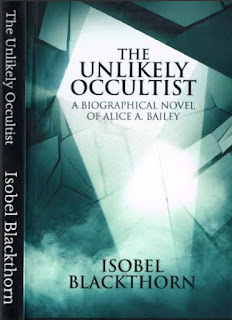 Well, I've got broad shoulders.  Maybe I should be complimented by the fact that disapproving Isobel Blackthorn complains that my work has lasted for nearly 40 years, has a strong internet presence, and "is foundational."

Well, I've better follow my doctors' admonition not to overstrain my eyes, so I'll sign out for now.