Worst book of the year, so far -- by Helgard Muller

It's been a bad year for me health wise and I'm delighted Richard Peterson (our "Rich of Medford") is assisting me.  There are so many developments on so many ugly fronts, it is difficult to keep up.  I am increasingly concerned about Evangelical and conservative Catholic devotion to Donald Trump, the raft of books proclaiming that Trump is God's chosen instrument.Donald John Trump is THE CHRIST.  Here's opening paragraphs from the worst I've read, PRESIDENT DONALD JOHN TRUMP, THE SON OF MAN, THE CHRIST.  No, that was not referring to Jesus.  It was referring to Donald Trump.

Here is the opening paragraphs from that horribly blasphemous book by Trump groupie Helgard Muller:

And, here's the cover of the so-far worst book of the year: 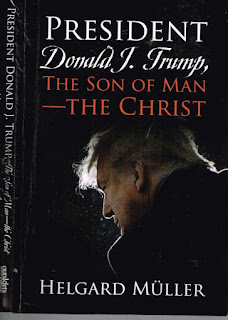