The United States government has been in a form of "shutdown" since October 1st.  Looming today is the spectre of tomorrow's "governmental default."  Immediately after the stock market closed yesterday, financial rating service THE FITCH GROUP announced it was placing the country on a AAA negative watch list.

I don't know which faction I am angriest at:  the "Affordable Health Care" with its forced contraception service payments being forced upon conscientious religious objectors and the fines for those unable to afford expensive health insurance (even those with same will have annual "donuts" of moneys that must be paid out of pocket first before insurance coverage kicks in) OR the TEA PARTY.

In my opinion, this may be a charade that inures to the benefit of the WORLD GOVERNMENT, Oooops, GLOBAL GOVERNANCE proponents.

Something ugly is brewing in the winds.  I am hearing too much talk of "global currency reset."  I have had panicked phone calls from clients re same and found plenty of discussion of same on the internet.

The slightly toned down G-20 websites are openly talking about a "TIME OF TRANSITION" or THE TRANSITION.

This ominous Washington possible default news has pushed to the back pages items that would otherwise be critical worldwide news:  A devastating 7.2 earthquake in the Central Philippines.  A devastating typhoon hit Japan the same day.  Both happened yesterday.  "Earthquakes in divers places" and/or "upon the seas distress of nations"??  Forgive me for even daring to think it!

This was the talk of what the New Agers hoped would happen to our government back in the early to later 1980s with "Harmonic Convergence," "Crystal Earth Papers," and Barbara Marx Hubbard's infamous THE BOOK OF CO-CREATION:  THE BOOK OF REVELATION.

Jose Arguelles, a co-laborer with Barbara Marx Hubbard on creating events designed to CHANGE TIMES to a 13 month calendar died in Australia in 2011.  The biographical books about his life tell us that he was raised a Lutheran but deeply immersed himself in the writings of Helena Petrovna Blavatsky and Alice Ann Bailey, inter alia, as an adult.  He was the one who started the 2012 movement.

Since then all have been talking about EMERGENCE and THE SHIFT.

I don't know about the others.  I pray I am wrong, but the events of October 2013 look like the long delayed events of the New Agers to me.  Same sex marriages encouraged with additional leave days for military personnel entering into same?

I don't like to quote Theosophical writers such as Yeats, but for those who reject Book of Daniel, Book of Revelation plain warnings, how about Yeats' line:  "WHAT STRANGE BEAST IS THIS, ITS HOUR COME ROUND AT LAST,SLOUCHES TOWARD BETHLEHEM WAITING TO BE BORN"??!!

CONSTANCE
Posted by Constance Cumbey at 7:20 AM 287 comments:

Last week I interviewed Dennis Cuddy the second hour of my internet radio program.  Dennis mentioned his mother Peggy who has been researching the New Age Movement for many years herself had developed a remarkable chart on the New Age Movement.  Peggy Cuddy's independent research was one of the very first to be sent to my attention after my local work became nationally publicized in 1982.  I had the pleasure of talking with Peggy Cuddy, Dennis' mother a few times.  Dennis I have spoken with often and highly respect his work.  Dennis sent me a copy of his mother's chart and I'm reproducing it here for you.  Valuable work it is indeed!  Enjoy!  Click on the chart to enlarge them to full page.  Feel free to reproduce them and pass them on to those in need of accurate information on the New Age Movement in its many stems and branches. 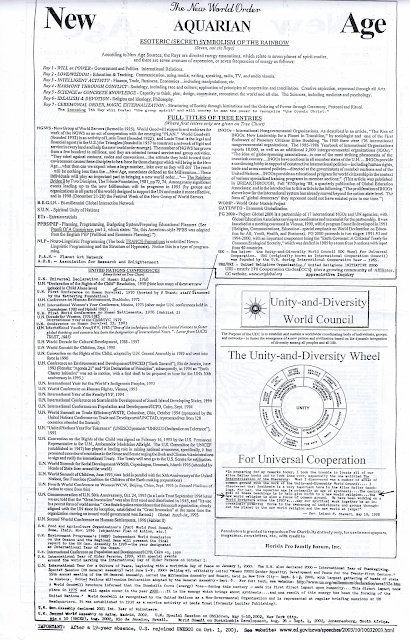