LEARNING TO LOVE BIG BROTHER -- YOU ARE SLATED TO BE "DE-ORWELLED"! 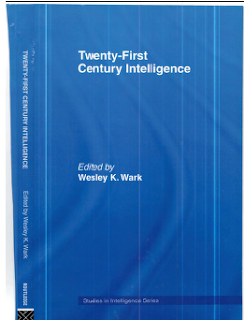 To my readers:  I was moved to write this article today after discovering the blatancy of material I found in my voluminous library that I had previously not had the opportunity to read.  Today I read it closely.  I composed the following article.  I thought it needed to reach a much larger article.  As I am still a columnist for NewsWithViews.com, I contacted the publisher who agreed with me that it needed to reach the public as soon as possible.  This article will be running on that website which has a much broader reader base than mine.  It is up there now, this Tuesday morning of December 4, 2012.  I want my own readers to have the earliest exposure possible, so here it is.  I would appreciate your feed back.  Sometimes writing is painful and difficult.  The material I found in the book, TWENTY-FIRST CENTURY INTELLIGENCE, by Dr. Wesley K. Wark angered me to the point that the words immediately flowed and found expression.

The article content is found below.  This is what they are planning for surveillance for our current times.

Our long perceived liberties are now at a dangerous tipping point.  I’ve been recently reflecting on my life’s  work informing the public of the New Age Movement and its related “hidden dangers.”  Those dangers are now becoming much less hidden.  Many are diverted by 2012 New Age Mayan prophecies and fail to see more here and now dangers.   Almost all from believers to those who have viewed the movie series THE OMEN or even the LEFT BEHIND books and films are familiar with the following Book of Revelation warnings:

As I first wrote in 1981 in my expository book about the New Age Movement, THE HIDDEN DANGERS OF THE RAINBOW, New Agers, and allegedly Christian fellow travelers were calling for a New World Order with an accompanying global food redistribution program -- aided of course by modern technology, i.e. computers.  Much more than mere redistribution, bad as that might be, was implied by that prophecy.  It also clearly meant  surveillance.

On the secular side, George Orwell (1903-1950) led a relatively short but insightful life.  His landmark novel, 1984, amply and graphically described the potential horrors and desensitization of a total surveillance society where we would eventually “come to love Big Brother.”  If you can no longer find that book, here is a place to read it on line for free:

The last two paragraphs of the book are the saddest part of Orwell’s prophecy.  The prisoner of the system had come to love Big Brother:

The voice from the telescreen was still pouring forth its tale of prisoners and booty and slaughter, but the shouting outside had died down a little. The waiters were turning back to their work. One of them approached with the gin bottle. Winston, sitting in a blissful dream, paid no attention as his glass was filled up. He was not running or cheering any longer. He was back in the Ministry of Love, with everything forgiven, his soul white as snow. He was in the public dock, confessing everything, implicating everybody. He was walking down the white-tiled corridor, with the feeling of walking in sunlight, and an armed guard at his back. The long hoped-for bullet was entering his brain.

He gazed up at the enormous face. Forty years it had taken him to learn what kind of smile was hidden beneath the dark moustache. O cruel, needless misunderstanding! O stubborn, self-willed exile from the loving breast! Two gin-scented tears trickled down the sides of his nose. But it was all right, everything was all right, the struggle was finished. He had won the victory over himself. He loved Big Brother.

Well, there are serious elements out there in the “HUMINT” (Human Intelligence) community now demanding for real that “we come to love Big Brother.”  They consider George Orwell a practical threat to their control freak aspirations.  As they expedite their manufacture of drones and other surveillance apparatus, they plot how to “De-Orwell” the populace.  Wesley K.  Wark, a participant-author-professor on the subject of Intelligence has overseen the collection of essays by fellow spies and wannabes on the subject.  The intelligence network is an international one with USA, Brits, Canadians, and even Russians now collaborating on how to flush out the rest of us who value both security and privacy.  I have one of his major books in my personal library, TWENTY-FIRST CENTURY INTELLIGENCE.  Individual chapter writers include besides Wark, Alan DuPont, Michael Herman, Melvin A. Goodman, Matthew M. Aid, Gregory F. Treverton, Nick Cullather, John Ferris and Ronald J. Deibert.

Wark might be the most frightening thinker of all.  If his fellow collaborators agree with him, as I suspect they do, we are all in deep trouble.  The apparent consensus is that “we must learn to live with Orwell.” [1]

“The diminution of 'Orwell', a codeword  for the fear of intelligence, will be a necessary condition for the success of a revolutionary change now unfolding in the practice of intelligence. Looking back, the  twentieth century may be seen as the age of Secret intelligence . . .

Whether rare, or the norm, public intelligence will require a new public outlook on intelligence, one beyond, as suggested above, the habit of 'Orwell'.[2]

Wark and his fellow contributors consider the task crucial and urgent.  His introductory remarks conclude with the excerpted following:

High sounding words all to justify what we so justifiably dreaded – an age of total surveillance and snooping.  They are determined to have it, but they cannot have it unless WE FIRST LEARN TO LOVE BIG BROTHER?  As of this writing, December 3, 2012, there were 50,500 google  NEWS references alone to the emerging drone technology.  There were in more than 30 million GOOGLE hits on the scary technology.

Drones serve both spying and weaponry functions.  Are they to be used as the potential enabler of prophesied search and destroy operations against believers?  We may currently rest in peace believing they are only to be used against believers of Islamic religions and ideologies.  As we were told in law school, harsh cases make bad law.  Once the precedent is set, it is out there for use against whatever stands in the way of “glocalist” agendas (“think globally, act locally).

I for one have no present plans to embrace Big Brother.  I pray you have none either.  Big Brother is decidedly NOT YOUR FRIEND!  It has long been said that eternal vigilance is the price of liberty.  That vigilance is now needed more than ever.  Otherwise, the “necessary condition” for “revolutionary fear is here!

The diminution of 'Orwell', a code word for the fear of intelligence, will
be a necessary condition for the success of a revolutionary change now
unfolding in the practice of intelligence.[4]