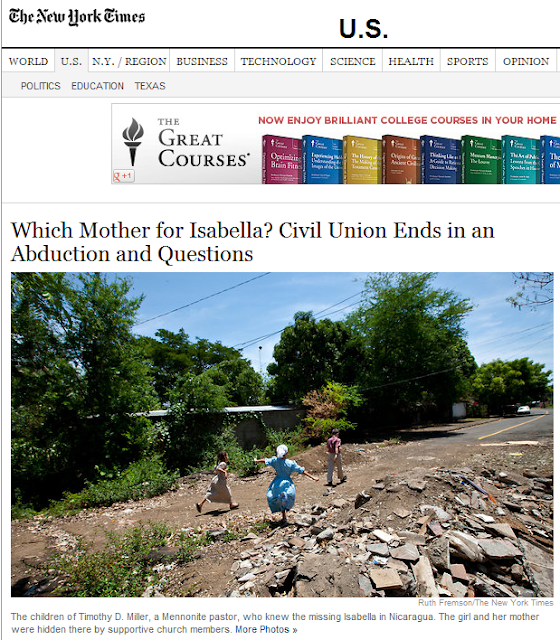 The "Gay Movement" is now revealing its true anti-Christian agenda.  I've thought and expressed my views for sometime that as it continues to advance, Sodom and Gomorrah may start to look somewhat tame by comparison -- or is it contrast?

Having met at a Virginia  AA meeting in 1997, two women fell in what they thought was "love," entered in to a "civil union" and then decided to "start a family."   One has to wonder if the AA philosophy of "your higher power can be a rock, a tree, or 'the group [AA] itself" had anything to do with the attraction of woman to woman,  One certainly is reminded of the Paul's societal analysis of the Romans of his day who evidently had a somewhat similar culture to what we are now witnessing here.  I quote from the King James Version.  Other translations are equally affirmative of the problem:


16  For I am not ashamed of the gospel of Christ: for it is the power of God unto salvation to every one that believeth; to the Jew first, and also to the Greek.17 For therein is the righteousness of God revealed from faith to faith: as it is written, The just shall live by faith.18 For the wrath of God is revealed from heaven against all ungodliness and unrighteousness of men, who hold the truth in unrighteousness;19 Because that which may be known of God is manifest in them; for God hath shewed it unto them.20 For the invisible things of him from the creation of the world are clearly seen, being understood by the things that are made, even his eternal power and Godhead; so that they are without excuse:21 Because that, when they knew God, they glorified him not as God, neither were thankful; but became vain in their imaginations, and their foolish heart was darkened.22 Professing themselves to be wise, they became fools,23 And changed the glory of the uncorruptible God into an image made like to corruptible man, and to birds, and fourfooted beasts, and creeping things.24 Wherefore God also gave them up to uncleanness through the lusts of their own hearts, to dishonour their own bodies between themselves:25 Who changed the truth of God into a lie, and worshipped and served the creature more than the Creator, who is blessed for ever. Amen.26 For this cause God gave them up unto vile affections: for even their women did change the natural use into that which is against nature:27 And likewise also the men, leaving the natural use of the woman, burned in their lust one toward another; men with men working that which is unseemly, and receiving in themselves that recompence of their error which was meet.28 And even as they did not like to retain God in their knowledge, God gave them over to a reprobate mind, to do those things which are not convenient;

Well, the miracle occurred and God evidently rescued one of the participants, Lisa Miller" from this unholy union.  She became a born again Christian, renounced her former lesbian addiction (her words).

Lisa Miller is the woman who gave birth to the child of the union conceived by in vitro fertizilization (i.e. from what had to be a male sperm donor fertilizing her egg -- to the best of my present knowledge 'cloning' has not reached a point of perfection to explain it nor do newspaper accounts indicate that it was her partner's egg fertilized and implanted in her.

Lisa Miller had a right and a sacred duty to be concerned about her daughter's soul and eternal destiny.  All of us who are parents have such a burden.  She gave her daughter visitation with her former partner in the 'civil union' she renounced.  However, her partner attempted continued corruption of the child by reading her pro-lesbian literature such as "Heather has two mommies."  She also reportedly took baths with the child.  A bath with a child may not be so startling normally with a woman bathing a child; however, when we have an admittedly sexual attraction to females, it takes on a new connotation entirely.

From Virginia originally, Lisa Miller and her "partner" lived in Vermont.  Vermont has long since legalized same sex marriage.

The Commonwealth of Virginia does not recognize same sex marriages.  Lisa fled there and went to work for Liberty Baptist Academy, a school affiliated with Liberty University (founded by Jerry Falwell).

Lisa fled Vermont to return to Virginia.  Her former "civil partner" fought for increased visitation and custody in the Vermont courts.  The Virginia courts ruled that the Vermont court had jurisdiction, something probably legally correct.

The Vermont court certain had very different ideas than I hold about the "best interest of a child."  Because her birth mother was now teaching her traditional views of marriage and family and eternal consequences of violating very plain biblical teachings on same, the court ruled that this was grounds to strip her of  custody and give sole custody to the "other mommy" who would affirm the "gay lifestyle" in which the child was originally conceived.

No room for conversion here, so the Vermont court evidently opined.

Mother did what we may all have to do before this battle is over -- she fled.  Those who helped her in what is appearing to becoming an "underground railroad" for Christians are hunted by the FBI, USA agents and Interpol.

Personally, I never thought I would live long enough to see those who believed marriage should be between a man and a woman characterized as "radical."  Theosophist, League of Nations' leader Salvador de Madariage (Javier Solana's grandfather / cousin / great uncle, whatever) referred to homosexual practices as "buggery" and condemned it.  Even L. Ronald Hubbard (founder of Dianetics / Scientology) claimed his methods could "cure homosexuality".

Suddenly, so many prominent views from the President on down "are evolving" and thousands of years of traditional belief are scrapped.  Suddenly we have a society where morality is turned upside down on its very head -- or is it "bottom."

Pray that those attending AA meetings to receive help for substance abuse issues not take so literally their belief that their "higher power" can be "a rock, a tree, the group, -- 'God however we conceive him to be."

So many times as I researched the New Age issues over the years, this is how lesbian addictions developed.  The gals attended meetings on legitimate issues (equal pay for equal work), then explored 'root causes,' then decided the root cause was "patriarchy" (short hand for "God the Father).  They then obviously scrapped "The Lord's Prayer" of "Our Father which art in Heaven" and went for 'matriarchal religions,' such as Wicca and/or (as did Lisa Miller and her former partner) Unitarianism, Unity.  Reading those accounts, the woman would recount that they were at those meetings and for the first time in their lives, the woman across the room started "looking good to them."

Extremely perilous and dangerous times are here.  Jesus warned us that when we saw these things come upon the earth to know that our redemption was near --- even at the door.  I frankly don't know how much worse it can get, but I thought before it couldn't get much worse but it has.  How much longer until the Scriptures are condemned as "hate literature" for warnings such as those given by the Apostle Paul?

CONSTANCE
Posted by Constance Cumbey at 2:31 AM 522 comments: