DEEPEST CONDOLENCES TO OUR NORWEGIAN READERS

Yesterday the world was shaken by horrific news coming from the Kingdom of Norway.  Bombs had destroyed buildings and injured many in downtown Oslo.  As if that were not enough, the horror continued and extended to Utoya Island, a summer camp for the Workers Youth League.  Early reports were that it was one gunman.  Some reports say it may have been more.  Early on, it was a suspected Islamic terrorist event.  Current reports point to a Neo-Nazi connection. 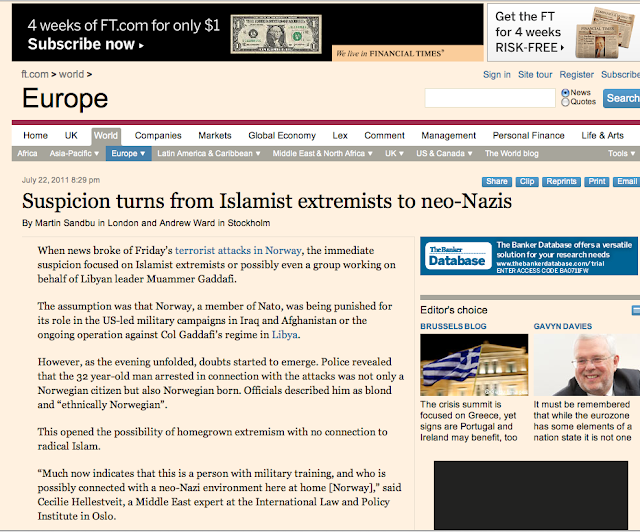 At any rate, this was an act of unexcused terrorism.  It was a sad day for all of us watching the unfolding events.

My book has been translated into Norwegian and I have had communications from Norwegian readers for upwards of the past 25 years.

May the Lord help our Norwegian readers and help us all!

It appears the killer is a Freemason:

The ENGLISH text of my book may be read as a full book looking just as my book in hand may be accessed by this link:

Are the nihilists being unleashed? Just read this site with disturbing quotes from Albert Pike, who also, it seems served as a major figure on behalf of the Confederacy in the Civil War of the USA:

We shall unleash the Nihilists and Atheists, and we shall provoke a formidable social cataclysm which in all its horror will show clearly to the nations the effect of absolute atheism, origin of savagery and of the most bloody turmoil. Then everywhere, the citizens, obliged to defend themselves against the world minority of revolutionaries, will exterminate those destroyers of civilization, and the multitude, disillusioned with Christianity, whose deistic spirits will be from that moment without compass (direction), anxious for an ideal, but with out knowing where to render its adoration, will receive the true light through the universal manifestation of the pure doctrine of Lucifer, brought finally out in the public view, a manifestation which will result from the general reactionary movement which will follow the destruction of Christianity and atheism, both conquered and exterminated at the same time" (William Guy Carr, Pawns in the Game, p. xv-xvi)."

ONE WORD OF CAUTION, HOWEVER, William Guy Carr used Eustace Mullins as a source. Mullins had his own distinct occult and anti-Semitic New Age agenda.

Hang in there, Constance. You have more friends and supporters here than you will ever realize.

There is a pdf of Breivik’s Facebook page hosted on Solid Principals Blog. (I’ll host a local copy here as well.) Facebook was the source of the image on Daily Mail. Here is how how it appeared on Facebook.

Some people are claiming this is a photoshop, but if it is then it must have been done by Breivik himself, because it was posted on his original Facebook and is now being used by mainstream newspapers like the Daily Mail.

Breivik also included Freemasons on his list of interests. According to this link, Breivik was with the Saint Johannes lodge in Oslo from at least 2008 onwards.

Paul,
Pope Benedict XVI is not a Freemason.
You just lost ANY credibility you might have had, as you are clearly gullible and clouded by wishful thinking.
Remember, you will be held accountable for the lies you spread and any damage you do to those whose character you unjustly defame.
Please think about this...for your own sake!
Lisa

By the way, Paul, the Catholic Church is the only organization in the world that has consistently spoken out against Freemasonry. Do your research!

The action of the Church is summed up in the papal pronouncements against Freemasonry since 1738, the most important of which are:

For MUCH more info. (if you are interested in the truth), see:
http://www.newadvent.org/cathen/09771a.htm

I have to agree with you. Although there has clearly been Freemasonry invasion and infiltration of the Catholic Church, its official position has always been consistently against it. I know of no credible evidence that the former Cardinal Ratzinger, now Pope Benedict XVI has ever entertained Freemasonry sympathies.

In addition, Paul, the Catholic Church is the only organization in the world that has always spoken out against Freemasonry. Do your research!

The activity is summarized in the papal church statements against Freemasonry in 1738, the most important are:

Actually amazed! Everything is really, specific, wide open is often a explanation with the dilemma. It includes the info.
tera2u.net

Well written ! i have to admit that it's very informative article. This really is another really very amazing and interesting publish. You've provided the publish that's proportional to the interest. Thank you for this publish.
http://lifehealth-club.com/
http://cartoons-movies.com/
http://triptourslive.com/
http://gossipmusics.com/

For their affordable price, excellent superior as well as the cambridgesatchel trendy styles, there is no end result in for all of you smart to research for the special replica. It is obvious the fact that replicas?? principal attribute that attracts purchasers is their sensible cost which could possibly be the apparent charm point. There can be an even brighter area in the replica handbags. It could possibly be the identical durability for that authentic cambridge bags.

If you additionally know that you will find several distinct Buy Diablo 3 Gold, 8 distinct vocations, not to mention, intercourse selection, then you recognize that there's a lot in order to experience Guild Wars 2 Gems. The sport arrives, without having anything extra, with seating regarding 5 diverse figures.