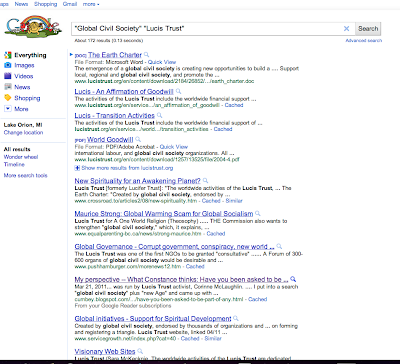 Just wondering if anyone else happened to see this.

I may well be behind the times on this; but, just yesterday, I listened to a podcast which mentioned, among other things, the term "integral spirituality" which is used in place of the 'outmoded' term "New Age" as it seems to have wider acceptance (or something like that). Dr. Jones states this term was coined by Ken Wilburn in one of his books (Integral Psychology, I believe).

Dr. Jones main concern was from the perspective of the Christian church. His main topic in the talk was Gnostic/pagan influences in the church coming from civilisation at large.

In the endnotes of Rob Bell's Velvet Elvis, he tells his young, impressionable readers to take three months and study Ken Wilbur. It takes absolutely no spiritual discernment giant to take one look at Wilbur's site and see that he is New Age.

I agree about the term "New Age". People hear it and immediately turn off. It's old stuff. Nobody is duped by that old stuff. We know NA when we see it and surely Rob Bell isn't NA. (I'm being sarcastic. This is the response I get when I talk about it.)

Dr. Martin Erdmann uses the term "secular Buddhism". Coming from Wilbur (no "n" at the end of his name, BTW) integral spirituality has a "positive" feel all inclusive kind of feel. Whereas, to older more traditional Christians the idea of secular Buddhism creeping into the church should cause some bells and whistles to go off.

I think it's a product of our pop culture that terms are outdated so quickly in general. "New Age" is still a useful term as it defines the goal: the dawning of the Age of Aquarius -- even if others want to change it. Of course, that's the goal of esotericism to constantly change the dictionary while leaving the definitions intact.

Thanks for correcting my "Wilburn." I just looked up "integral spirituality" and I find it's "Ken Wilber" so I do stand corrected.

I'm appalled that the "church" even takes Rob Bell seriously at all. In the 2nd and 3rd centuries, he would have quickly been labeled a heretic and thrown out!

What has happened is that the term has been deliberately hijacked to mean only the movement away from monotheism to an understanding of the supernatural based on paganism and the occult.

The movement should not be defined by whatever the latest tag lines are or whatever outbreak is the latest.

Maybe the term New Age is only understood by those who have taken the time to study the history of the movement which covers political changes as well as deliberate changes to the international cultures.

Do not be distracted from what is occurring by those whose understanding of the New Age movement is shaped by the disinformation specialists, the media, and those who are more interested in gossip than study.

Challenge the next person who says they know all about the New Age movement and it's gone. Remember that effort was made by New Age leaders themselves in the 90s when people really were awakening to what was going on and they wanted to throw people off the scent.

Another example of Biblical truth being twisted to fit an agenda.

You are right, of course. I have a guy who's been commenting on my blog who, while he doesn't deny the New Age, he thinks he understands it, yet each time he describes it, he has it wrong. So, each time he does this, I correct him. I think he's starting to understand it a bit better now.

"The professor said it is high time for Europe to propose a new mission, or what political scientists call 'messianic political legitimacy,' putting forward a vision or a dream of a new project that citizens are likely to support..."

Wow! What a coincidence! I just finished reading the section in James Webb's book THE OCCULT UNDERGROUND about "messianism" and the issue of "political legitimacy."

I'm not the only one seeing through this lizard, oops Newt. I don't agree with Devy on everything, but she wrote a 2 part series on Gingrich in 2009:

very usefull, i have anymore about hypnosis How to Create Irresistible Curiosity With Rapport Hooks Using Hypnosis Hypnosis article what is hypnosis

They DO think we are stupid. Just like they think we are stupid as Gpv. Perry is being pushed forward for a presidential run after attending Bilderberg. Getting into Alex Jones recently, and he has been making the connections for me, explaining how the Globalist Revolutionaries have been exerting power through "ideas," connections and resources. Time to pray for Ron Paul or Cain, perhaps Bachman. Perry is a traitor after facilitating foreign purchases of U.S. infrastructure to promote the NAU.
It is really awful the way modern language is being twisted to denude it of meaning. New Age, socialism, democracy and on down the line. There is a leap to be made from the outline of basic knowledge we get through education where we have to move from theory to practice, and history confirms the truth of philosophy. It terrifies me the way so many people have not made that leap, and have abandoned loyalty to the truth. Denial of truth is denial of Christ! Even if it is material or immaterial truth, it is an offense against God to reject it, and to not seek it!
Can I tell you how disappointed I am in my own Catholic population? 3/4s are dumb, deaf and blind. Like DOWD. Christian unity could be a reality if Catholics remained true to the Faith that the Church has passed on from Christ Himself. At least, however, thank God for Pope Benedict!
God save us! God have mercy on us!

Lovely posting, thanks for nice read!

Do not pray for tasks equal to your powers.Pray for powers equal to Buy rs gold your tasks.Then the doing of work shall be no miracle, but you shall be the miracle, Fear not that the life shall come to an end, but rather fear that Runescape Money it shall never have a beginning,. At twenty years of age Runescape2 Money., the will reigns; at thirty, the wit; and at forty, the judgment.

This is an extremely well written article. I will be sure to bookmark it and come back to read more of your useful info. 온라인카지노

The article has truly peaked my interest. Appreciate it! 온라인카지노