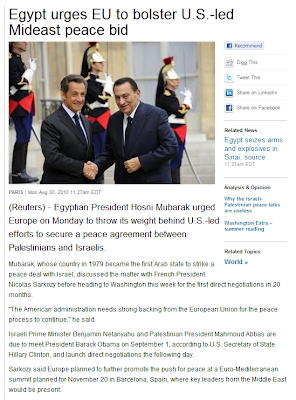 Of particular interest to me given my past research is the date of the upcoming conference -- NOVEMBER 20th. Review Herb Peters (fulfilledprophecy.com) and my old blog posts on "Solana's November Presents."

November 20th is the 15th anniversary of the signing of the Treaty of Association between the European Union and Israel. Javier Solana was exclusively in charge and the one signing. I am going to put a picture of THAT November 20th event on line.


Although Mr. Creme has finally released Mr. Patel from his divine burden, it doesn’t mean that he has given up on the idea of a messiah for these troubling times. In fact, his meeting with Mr. Patel was just part of an extended visit to the Bay Area to recruit new believers.

A crowd of more than 600 gathered at San Francisco’s Palace of Fine Arts on a recent Sunday afternoon to hear Mr. Creme. Looking his 87 years, he was gently assisted to center stage and then sat stoically as an audio recording played his voice, in a slow Boris Karloff cadence, purportedly channeling the words of Maitreya. “My plan is to show you that the way out of your problems is to listen again to the true voice of god within your hearts, to share,” he said.

When the recording ended, Mr. Creme spoke about the various crises in the world, including the growing imbalance between rich and poor that he ascribed to “an outmoded way of living” — a message that seemed to resonate with the mostly white crowd, some of whom had arrived in Mercedeses and BMWs.

Mr. Creme went on to explain that invisible “brothers” from other inhabited planets in our solar system had been on Earth to help mankind escape its problems and usher in a new age.

J. Gordon Melton, a religious scholar who has studied Share International and Mr. Creme since the 1970s, described the group as “small and harmless.”

The group’s messianic message — that a compassionate savior will come and teach the world better ways — “in hard economic times and war has an appeal,” Mr. Melton said. But, he added, non-Christian messiahs tend to face fierce opposition in the United States.

That became clear at Mr. Creme’s appearance when a man in the audience disrupted the event by pointing and shouting, “Don’t believe these lies! This man is the devil!” (At least one peson in the audience gets it!)

Patel, IMOH, is far too young to meet the description of the fully grown man who the New Agers planned to trot out in the spring of 1982. Creme did not come up with his lame London story until five days after he and I had our first debate which took him totally by surprise. Up until that time, the New Agers delusionally thought they were safe from premature detection and exposure.

Some of the videos pointing to Patel claimed he never blinked. I watched them carefully -- he did blink!

It's funny that Obama will be there too...
Where is he from again? Kenya maybe? Who knows?
That second rate, third place, runner up for antichrist who sprung up from nowhere?

Yet I am not totally sold that Obama is the antichrist either...

I still cannot rule Solana out, but then again, time and events will ultimately tell.

A revealing insight into European and world politics

Constance,
Presumably the first mention of Nov 20th should be the year 2010 and not 1995 as appears in the text - see "A Euro-Mediterranean conference is scheduled in BARCELONA on NOVEMBER 20, 1995, THE 15TH ANNIVERSARY OF THE SIGNING OF THE TREATY OF ASSOCIATION WITH ISRAEL ON NOVEMBER 20, 1995".
Trying to help.

A nice uplifting Ramadan message from a Palestinian imam preaching the message of peace:

Aircraft have had to be diverted and more than 21,000 people evacuated after an Indonesian volcano erupted for the second day in a row.

Towering clouds of ash are being spewed out of Mount Sinabung in North Sumatra and thousands of villagers living on its slopes have been forced to head to emergency shelters, mosques and churches.

Homes and fields containing crops have been blanketed in heavy, gray soot and the air near the volcano is thick with the smell of sulphur.

Police can put a GPS device on your car without your consent...

This Beck fan (still listen to him) has been puzzled for some time when Beck talks about the USA a divine plan and how God is all about freedom. Huh? I would think. What about the Hebrews in slavery, and so many other peoples? I suppose to some extent God is concerned with that, but I don't think it is #1 on His priority list. And I wondered if somehow the USA figures in with Mormon eschatology, but I didn't find antyhing when I looked on the net. However, the other day I got an email newsletter which seems to cover the topic. Here is a link to an article that I found helpful-

I think, though, when Howse panicked that maybe Beck wants a Mormon theocracy- well, I don't see Beck like that. But I link to the article so one can see there may be ties with LDS theology and Beck's viewpoints on the USA being practically a divine program.

Also, the Blog of Veith carried a story from another source which is interesting to read.

(I know I have the address for Veith's blog- he's not the author of the second article, but the comments are good to read.)

ps-yes, i also saw that holly ran an article on the matter

If you understand Mormon eschatology you can understand much of what Beck says. In fact, I think Beck sees himself as the "messenger" figure who, according to Mormon eschatology, will emerge to save the Constitutional Republic. I could be wrong-certainly. However, his actions all indicate this neo-messianic consciousness of his self appointed mission.

Hmm. I don't know much about Mormon endtimes stuff. Maybe, though, Glen Beck does see himself this way. Interesting. If so, I think it would be somewhat deceptive on his part to not be honest with the people about what is really in his head.

THANKS -- don't know where my head/eyes were when I posted that, but it is corrected now IN VERY LARGE TYPE!

So J. Gordon Melton said that Creme and company were harmless. Melton is THE SCUM OF THE EARTH. He IS a New Ager posing as a "religious scholar" and "ordained United Methodist minister." He almost does make BC look harmless by comparison. Melton is into VAMPIRISM and J. Z. Knight's 35,000 year old man (or was it JZ's jazzy body?).

My "Christian" evangelical opponents who staged the Denver Disinformation Conference on March 14-15, 1995 had Melton speak with the title, A CHRISTIAN RESPONSE TO THE HIDDEN DANGERS OF THE RAINBOW.'

I didn't realize Melton was in fact a New Age proponent. I've used his encyclopedia's over the years for research purposes.

Don't forget to stock up on light bulbs.
http://www.ncpa.org/sub/dpd/index.php?Article_ID=19773&utm_source=newsletter&utm_medium=email&utm_campaign=DPD
http://tinyurl.com/2w8x57x

Beginning today, it is a crime to manufacture or ship for sale a traditional 75-watt incandescent light bulb in the European Union (EU), says the Washington Times. The United States is scheduled to begin a phaseout schedule mirroring the European plan in 2012 -- the same year incandescent lights are to be fully phased out in the EU:.....
Instead, 75-watt packages have been flying off the shelves as customers fill their closets, garages and attics with lighting supplies for the long term. (more at the link)

MELTON took in many people -- I have been on his case since 1985. He started stalking me much earlier.

Recent talk in Spain about Javier Solana running for President there -- some retirement!

See link over at Fulfilledprophecy.com