Is this possibly THE ARMAGEDDON SCRIPT in action? 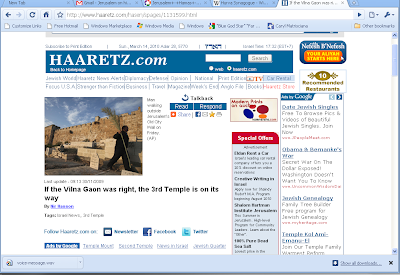 UPDATE - UPDATE!
It appears to me that the "Hurva Synagogue" rebuilding might be taking place concurrently with a "Third Temple" rebuilding. If so, the ARMAGEDDON SCRIPT analogy becomes even more relevant!
PLEASE REFRESH YOUR BROWSER OFTEN and DO YOUR OWN INTERNET SEARCHES! 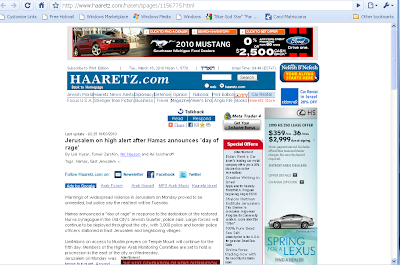 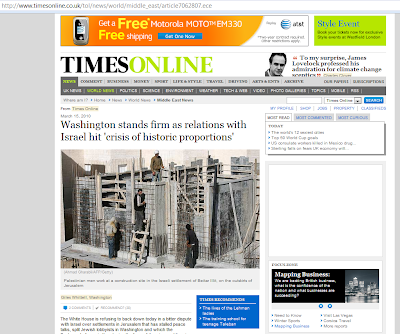 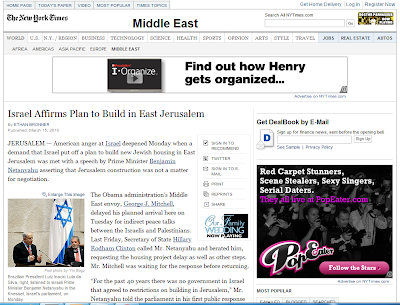 UPDATE: Click on all three pictures to view full page. One of my correspondents, Jackie, has sent me important new information which I am adding to this post.
New Age author Peter LeMesurier wrote a 1981 book about how the entire New Age scheme might be pulled off. THE ARMAGEDDON SCRIPT, that book, called for the staging of a fake "second coming" from the Temple Mount in Jerusalem. He wrote:

"Their script is now written, subject only to last minute editing and stage-directions. The stage itself, albeit as yet in darkness, is almost ready. Down in the pit, the subterranean orchestra is already tuning up. The last-minute, walk-on parts are even now being filled. Most of the main actors, one suspects, have already taken up their roles. Soon it will be time for them to come on stage, ready for the curtain to rise. The time for action will have come." (From The Armageddon Script, by Peter LeMesurier, St. Martin's Press, 1982: New York, p.252).

He also wrote in that same book that the New Agers would not have to worry about opposition from the "Old Age" as the massed forces of the Old Age would go on to defeat each other in a massive, mutual venting of long pent up aggression.
Whether this is an intentional playing out or not, you can well bet that to the New Agers, it will be a clear cut case of "Crisis equals opportunity.
If you haven't already done so, you might want to pull down my on-line .pdf version of my second book, A PLANNED DECEPTION. The first chapter deals with "THE ARMAGEDDON SCRIPT." You can access it by clicking here:
Things appear to be happening very fast. Stay tuned!
CONSTANCE
Posted by Constance Cumbey at 5:37 PM

Haaretz reports that US confirms Peace Process is to continue

I saw your talk about Maitreya about 3 years ago now.

I found it on the private section of the old prisonplanet.tv where we had to pay. I was just wanting to learn as much as possible as quickly as possible. Alex Jones pulled it after customers complained that their details were being exposed.

I'm not the brightest person in the world and I've not really got a great grasp of the Bible yet but I just want to Thank You for all the great research you have done, and the Great researchers on this site also.

I am born a Catholic but listen to conservative Christian Radio as much as possible now. I don't attend mass but I think about Jesus so much every day.

I live in Scotland UK and I just wanted to say your ministry really reaches so far.

Please refresh your browser -- I added new material sent to me by correspondent Jackie Duncan.

Here's a little background on the Huvat Synagogue. Speaking of the Armageddon Script, it may well be significant:

"After the site came under Israeli control in 1967, a number of plans were submitted for the design of a new building. After years of deliberation and indecision, a commemorative arch was erected instead at the site in 1977, itself becoming a prominent landmark of the Jewish Quarter.[3] The plan to rebuild the synagogue in its 19th century style received approval by the Israeli Government in 2000 and the newly rebuilt synagogue was dedicated on March 15, 2010.[6] The company involved with its reconstruction believes that restoring the synagogue to its former glory will once again allow it to serve as a centre for World Jewry.[3]"

It appears to me that the "Hurva Synagogue" rebuilding might be taking place concurrently with a "Third Temple" rebuilding. If so, the ARMAGEDDON SCRIPT analogy becomes even more relevant!

PLEASE REFRESH YOUR BROWSER OFTEN and DO YOUR OWN INTERNET SEARCHES!

I can’t remember where I saw it ,as it was ages ago

but someone on a web site showed a plan of the temple mount and apparently when the dome of the rock was built they miss caudated the measurements, to the point that the 3rd temple would be built exactly where the bible states.

Also they made a reference to the bible where it says that a miss calculation would be made by the builders of the dome of the rock.

Can anyone verify this please?

However it can be shown that the Dome of the Rock was not built over the site of the original temple of Solomon, but was indeed built where the court of the Gentiles stood and where even unwashed Canaanite slaves could mingle. Also it can be shown that the Bible foretold the building of this shrine over 1200 years earlier, and labelled it as “an abomination that desolates” to the God of the Bible.

this link has the map on it scroll half way down.

First time I saw this one. I'm posting it just in case others missed it.

"And there was given to me a reed like a rod. And the angel stood saying 'Rise and measure the temple of God, and the altar, and them that worship there. but the court which is outside the temple leave out, for it is given to the Gentiles and they shall tread the holy city under foot forty-two months.'"

People will begin arriving at the Mugrabi Gate in Jerusalem in just under 90 minutes (7:15AM Israel time, 1:15AM EDT Tuesday) for International Temple Mount Awareness Day, an event the Obama administration appears to be monitoring directly on site. (CIA would be one thing; it’s their job; this is different.)

I have posted a update piece on my blog. I am covering information in the comments section related to the first three articles I have written. These pieces would have fit easily into my articles, but were cut due to space. For anyone wanting a deeper understanding of what is taking place, I would suggest taking a peek.

Dear Dorothy,
Thanks for sharing the information regarding the Temple Mount Awareness Day.
I will pray today for Israel.

By His Grace,
-SV

I think it is very likely that we will see construction starting on the Third Temple within many of our lifetimes. I'm not certain that the political spectrum has cleared the way for that to happen any time soon however.

I read your book The Hidden Dangers of the Rainbow back in College. I'm happy to have found your blog. You are a Michagander no less? Keep up the good fight against deception as we reach the finish line where Jesus comes back. Stumbled on your blog again doing a search for the Armageddon Script. Amazing what I am seeing. Blows my mind.

found it on the private section of the old prisonplanet.tv where we had to pay. I was just wanting to learn as much as possible as quickly as possible. Alex Jones pulled it after customers complained that their details were being exposed.
where can we find WOW Gold? Some days ago,I am a runescape player,I Buy RS Gold on some sites,but RS Gold is so expensive and! now my friends recommend me a new game Eden Eternal, I search some Eden Eternal Review ,hope I can can Eden Eternal Gold easily!

This is only an idea, which may be far-fetched at present, but maybe not in the future. I don't know whether you (or people that you might know) are interested in "geocaching". I thought of a possible Christian application.

In Brother Yun's "The Heavenly Man" I read of a Chinese evangelist who buried a bible six feet under the ground, presumably during the Cultural Revolution, and later, whe he felt bidden by God, he dug it up and sent it to Brother Yun.

That suggested to me the idea of geocaching in anticipation of a future persecution: to bury bibles, and related useful materials (like commentaries, or "life application" versions) to help people who could recover them during a persecution, during which they had become unavailable. They would need to use sealed containers, so that air and moisture couldn't enter and ruin the contents.

However, the idea would not be to publicize the "capsules", because they would have to be hidden from persecutors. Thus the location (or geocache coordinates) would be passed only to trusted people, after the manner of family secrets,to be used only if and when needed. Anyway, there's a possible project for Christians interested in geocaching!

Satchel understood that the great white players such as Joe DiMaggio for example, received treatment from others that cambridge satchel would help propel their star status and legendary accomplishments. He knew if he was going to ensure his own legacy, he would need to do that self promotion himself. In a way, it's as if Satchel Paige understood cambridge satchel company in this early era the importance of having a personal brand. He even contributed to discrepancies about his age in order to make his accomplishments more extraordinary. We hear that one of the greatest mysteries of the 30's and 40's was the true age of messi jersey!

Your post really cool and interesting. Thanks very much.

I was more than happy to uncover this website.

Thanks for sharing the information

thank you very helpful article. allow me to join to share health articles with your article hopefully useful.

Immediately Treat the disease you are suffering, before it gets worse