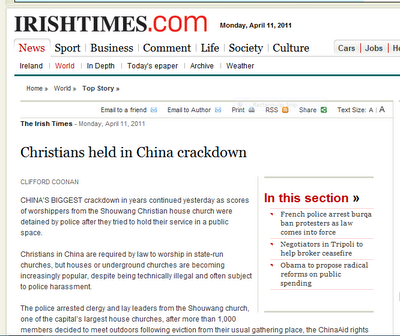 According to a brand new story in the Irish Times today, Chinese pressures against Christians worshiping independently of state sanctioned churches is growing.  If only our government were half as concerned about the Christians persecuted in China and elsewhere as they appear to be over "New Age" rioters in a variety of Mideastern countries!  The USA is deeply indebted to China which probably isn't going to make life any easier for persecuted Chinese Christians.  Further, because of the indebtedness, our leverage with China on this or any other issue has to be greatly diminished.  Pray for our Chinese brethren and pray for conversions of their persecutors as well.

This also on today's news stories after I posted the above,  It appears that our leverage with China is greatly diminished.  The crackdown on Chinese Christians is coming from the direction of the Chinese Communist party per this UPI article.  One word of caution, however.  UPI is allegedly owned by Unification Church, so independent verification of the material is in order! 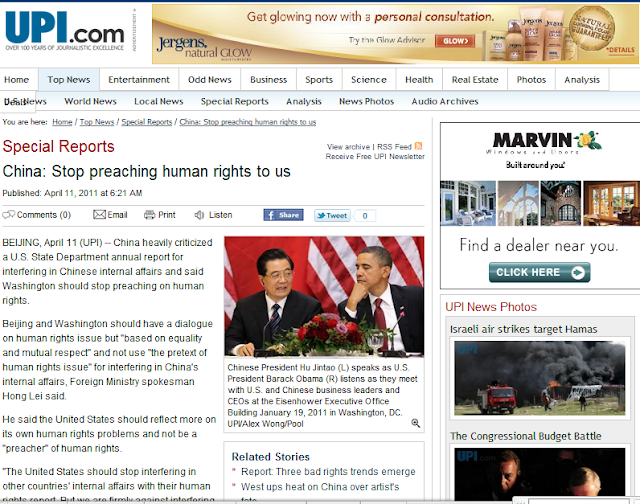 
CONSTANCE
Posted by Constance Cumbey at 2:32 AM

Reported about 1 hour ago
(on the 1 month anniversary of the last one):

The quake was centered about 164 kilometers (101 miles) northeast of Tokyo, according to the USGS. Residents in Tokyo felt the jolts.

Workers at the crippled Fukushima Daiichi nuclear plant were asked to evacuate.

Pray for those in Japan!

Evidently, that quake has since been 'lowered' to a 6.6. Either way, the Japanese people need our prayers.

Update on the situation concerning the Chinese congregation:

Please refresh your browser. China is thumbing its nose at any USA criticism of its human rights policies.

I've always had a heart for the persecuted church around the world. I think it's not too long away for us in America and the West, after some really big changes happen, whatever they may be.

I've gotten a newsletter from Voice of the Martyrs for quite a while now, and the founder, Pastor Wurmbrand, has an excellent book "Tortured For Christ" that I think should be required reading for every Christian.

As for Communist China, they refuse to learn the lessons of the past that all anti-God tyrants won't learn: The harder you try to stamp out the Truth of the Gospel, the faster and wider it spreads!

Are you in an anti-communist mood today?

Then check this out...It's probably the best site of its kind I've ever run across, and I've been surfing the 'net for a decade and a half:

Under the "Latest Commie News" section is a link to video of the main speakers at Soros' "Destroy America Conference" that took place this past weekend at Bretton Woods. I haven't watched them yet, but better take a look before they disappear down the memory hole....

Thanks for your thoughts re: my recent absence. As for me, I've been busy researching and writing for my blog which has taken up a lot of time of late. Also, there was a spate of commenting that really took up a good portion of my time.

I don't contribute that much here as this site covers mostly the current goings-on outside the "Church" whereas I'm focusing on what's happening within -- primarily the hyper-charismatic wing. I do catch up on reading after being gone a few days as I learn from individuals here.

I hope and pray the others you've mentioned who've not spoken on their own behalf or who've not had others speak for them are doing well.

I am the anon who posted the roll call over the weekend. I'm glad to hear you are doing well. I have learned from the contributions of everyone I listed, and am sure others feel the same. The various perspectives add so much to the conversation here. Unfortunately I don't have much time to read blogs and I rely on this one for most analysis of the New Age movement. This blog attracts people who, even when they disagree among themselves, think deeply about these issues.

I, too, hope those who have not reported in are well. A few names I listed had mentioned battling health problems and family difficulties. A couple of others who have been missing for a long while now (unless I missed recent posts) are:

Yes, hopefully the other MIAs are doing well. I'm glad you get something from what I and the others you listed post on here.

And, I hope and pray you are well, too!

Marko,
Rev. Wurmbrand died in 2001 at the age of 92. He was Jewish but because of the treatment he received from Christians during WWII he converted to Christianity. His wife, also Jewish, died six months before he did. He did much for the Christian community over the years.

His book Marx & Satan is a classic. It explained so much for me.

Sarah Leslie is covering my radio program tomorrow night with an extremely important topic: TRANSHUMANISM. She will be interviewing Dr. Martin Erdman, an expert and writer on the subject and its increasingly obvious and not so hidden dangers.

Thanks Marko for the CommieBlaster.com link. It's phenomenal and mind-boggling.