The world awoke this morning to the dreadful news of Japan's earthquake and tsunami tragedy.  Like the recent earthquake in Christchurch, New Zealand, the Japanese 8.9 mw quake occurred during prime business hours when people were out and about.  This very blogspot has enjoyed regular Japanese traffic and our sincere condolences to them and their fellow countrymen during this extremely trying time.  Japan experienced two prior major earthquakes this week, a 7.3 and a 6.2 one.  The latter generated a somewhat smaller but still dangerous tsunami. 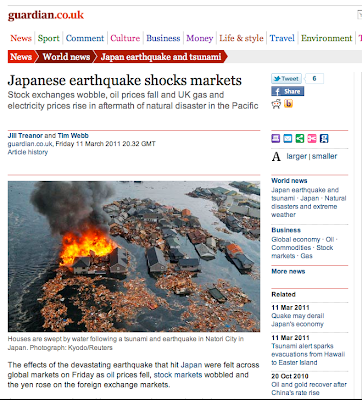 Surely, we should all take these signs as indicators from God that we do not have forever to reconcile ourselves to Him.  Jesus clearly warned of such events and his remarks are recorded in the 24th chapter of Matthew.

This should be a time of sobering reflection for all of us.  It should also be a time to remember to love our neighbors as ourselves, the example of the Good Samaritan, and the equally sobering warnings of Matthew 25.

Top story on the Drudge Report:

The amount of radiation reached around 1,000 times the normal level Saturday in the control room of the No. 1 reactor of the Fukushima No. 1 nuclear power plant, the Nuclear and Industrial Safety Agency said.

The discovery suggests radioactive steam could spread around the facility operated by Tokyo Electric Power Co.

About that 'Supermoon' connection:

My prayers go out to all in Japan, and those effected by the Earthquake. I also want to urge people to watch and fortify yourself, because I have a feeling that maitreya is going to have his first interview in Japan. Just as his first interview in the United States followed the quake in Haiti, an interview on Japanese tv may very well may follow the quake.

I wasn't aware of a Maitreya interview in the U.S., following the Haiti quake. Is there a video of this ghost, or is it in text form, or what? Thanks.

there was lots of talk and lots of guesses, and lots of claims made after the Haiti quake. That is when ben creme said that maitreya gave his first interview in the U.S. Japan is supposed to be the country where his first interview outside the U.S. is supposed to take place. I am only going off of what is said at cremes site. I HOPE that I am wrong and there are no more interviews with "maitreya", but if there are, than it the interviews seem to follow a pattern, and I would not want to be around on his "day of declaration".

According to the BBC, 88,000 people are now missing in Japan.

12 Unsustainable things that will soon come to a disastrous end on our planet...

Creme is a raving lunatic. According to his site, every man anyone reports seeing is Maitreya, every star in the sky is the star we were supposed to see. Maitreya's interview would somehow magically reach out, touch our souls and convert us to him...we would all know that it was Maitreya. Since this whack job announced that the interview had taken place, we're all still running around guessing who it might have been, I'd say that prophesy was contrived and false. It appears to me that Creme dropped a little too much acid in his younger years....or perhaps he never stopped.

FWIW. Top, right "News in Brief" section, ends with the following comment, by the EU's foreign policy chief, regarding her opposition to a no-fly zone in Libya:

There is a good deal of speculation on the web that HAARP has played a part in the unprecedented number of 'natural' disasters of recent years.

The manipulation of weather has been known since the Vietnam years. And given that the lord of this world now has access to these weapons through his human agents, would it be any great wonder if he used them to further his agenda? How could he resist?

Have you heard two recent shows of Future Quake discussing the activities of Rick Joyner, General Boykin and his chums and their wider dominionist application? They are stunning.

This is of particular interest to me as the churches in my area (Exeter, UK) are riddled with dominionism/whacked out Pentecostalism.

Aerial view of the awesome scale of Japan's destruction...

Our son went to Tokyo last week and was in a meeting in a Honda plant when the earthquake hit. The place has been destroyed. He survived and walked out over rubble. We are waiting now to hear if he succeeds in getting a flight out of Japan. Please pray for his success in getting back home to us. Thanks.

(CNN) -- The powerful earthquake that unleashed a devastating tsunami Friday appears to have moved the main island of Japan by 8 feet (2.4 meters) and shifted the Earth on its axis.

"At this point, we know that one GPS station moved (8 feet), and we have seen a map from GSI (Geospatial Information Authority) in Japan showing the pattern of shift over a large area is consistent with about that much shift of the land mass," said Kenneth Hudnut, a geophysicist with the U.S. Geological Survey (USGS).

Reports from the National Institute of Geophysics and Volcanology in Italy estimated the 8.9-magnitude quake shifted the planet on its axis by nearly 4 inches (10 centimeters).

- It lifted a section of the ocean floor 50 feet over a span of 180 miles, according to the U.S. Geological Survey.

- They don't lose a lot of energy as they move.

- Tsunami waves travel as fast as 400 mph across the oce...the speed of a jet airliner. Over land, they move at 30 mph. That's too fast to run from.

That should read: "across the ocean"

Pray hard for Japan. There is much talk of fear of meltdowns of atomic reactors from tsunami and earthquake damage. If so, the Chernobyl effect which poisoned many could be multiplied.

Can someone out there tell me whether Jack Van Impe is still alive?

I heard a rumor that he had passed away in January...and that his Television Ministry is still being aired, but is showing old tapes.

I just hope and pray that this is not true.

I believe he is still alive, but he is a FALSE teacher.

I do not know why it is so hard for people to figure out these false teachers. It is not that hard if you listen what they say, but more importantly what the Word says. If a man utters predictions and they do not come to pass, then he is not of God.

Jack Van Impe has been uttering predictions for over 20 years and has been WRONG countless times. This would be a BIG red flag that he is not of God.


JERUSALEM – Israel said Sunday it has approved building hundreds of settler homes after five members of an Israeli family — including three children — were knifed to death as they slept in a West Bank settlement over the weekend.

The attack and the government's response threatened to drive Israeli-Palestinian peacemaking even further out of reach. Israel, which blames the attack on Palestinian militants, is liable to set aside an emerging peace initiative it planned to propose, while the planned construction of new settler homes deepened Palestinian mistrust.

'We condemn this act of accelerated settlement construction,' senior Palestinian official Saeb Erekat said. 'We urge the international community to intervene and implement the two-state solution. This is the only way out of this vicious circle of violence and counter-violence.'

Praise God, our son is back in the country and we trust he will be home before the day is over. But how horribly sad for the thousands lost in Japan and their loved ones. How horrific life is.

And anon 12:18. Thank you for your prayers. Much love to anon from anon.

Gimme a break! You don't believe in global warming, but believe there's a weather/natural disaster making machine? If we had such technology, why isn't Venezuela in rubble right now? Or Iran? Ridiculous. I guess if it's on the internet it must be true. See there's this subduction zone where two, no three, continental techtonic plates are moving against each other and...oh, never mind! It must've been an earthquake machine owned by the Freemasons. Ridiculous!

Is your gmail working? I have something to send to you.

I do not know why Japan has been hit by one of the largest earthquakes in history.

I do not know why New Zealand has been hit not once, but twice by devastation.

I do not know why Haiti has been plagued by earthquake and disease.

"He causes His sun to rise on the evil and the good, and sends rain on the righteous and the unrighteous." Matthew 5:45

"Do not be deceived, God is not mocked; for whatever a man sows, this he will also reap." Galatians 6:7

But, get ready America - your time is coming.!!.

Jack van Impe's offices are not all that far from me. While he has not exactly been a profile in courage in identifying the New Age Movement, he is still living and conducting his ministry. As far as I know, he is alive. It would have been very big news here had he died. His internet site is alive and well as of March 14, 2011.

Your tone is almost gleeful. Are you looking forward to America's downfall, Mr. Watchman?

Ron Reese on 5 Doves website has discovered that - ON MARCH 11TH, EXACTLY ONE YEAR AGO, JAPAN DENOUNCES ISRAEL.

Here is the link he gives -

I should add that the day I see Silicon Valley - Palo Alto,Atherton, Cupertino have distruction on scales like Japan, I would believe the hand of G-d is in the midst. Ceo's in this area that have the gulf stream jets, billions of dollars, yachts have all of this for a reason. It is not worshiping Adonai. It should give credence to the technology that is developed and being used by the masses.

Has anyone seen this? It was a statement made by the Japanese Secretary/Director General the same day as the earthquake.

Statement by Press Secretary/Director-General for Press and Public Relations, Ministry of Foreign Affairs, on the decision of the Government of Israel regarding the construction of housing units at settlements in West Bank including East Jerusalem

Correction to last post. The Japanese statement was made last year on March 11

The number of radiation achieved some one,thousand times the traditional storey Saturday inside mastery room of the No more. one nuclear reactor in the Fukushima No. 1 nuclear power flora, the particular Atomic and also Commercial Base hit Agency said.

I really like your blog it's really nice. I really enjoy here. & Your article its so unique its amazing. Thanks a lot for sharing. Keep blogging.
Runescape Gold
Buy Runescape Gold
RS GP